We had our cattle work day at our place, and of course, it's taken me over a week to get it posted on the blog.   I've started coming  down with a serious case of  procrastination  lately.  Hopefully it will pass soon and a little motivation will come along and give me a swift kick to remind me to get going..... If it were only that simple ;)

OK. So let's get back to the reason for my beginning this post......cattle work day.  One of our neighbors came over to help Shane out, which gave me the opportunity to sit on top of the rail and watch. How nice!  I did take a few photos of it all.  I have to admit, I felt pretty useless sitting up on the rail.  Finally, after asking what I could do to help, my sweet husband told me to stand at a gate that had no latch.  My job was to keep the cows from pushing this gate open.  I tell ya folks, it just didn't feel right letting our neighbor help out while I "watched" the gate.  It may take some getting used to.  Then again, after a day of working the goats/cows when no one is available to help, I may be dreaming of the day I sat on the rail, supervised the non-latching gate, and snapping photos. 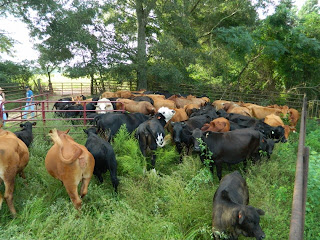 All of the cattle were driven into this catch pen (as we call it), and the sorting began. 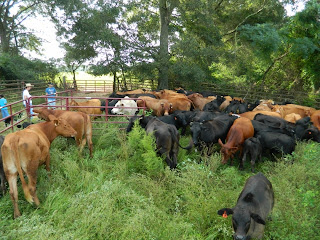 This was the day for Shane to decide which cows would be kept in the herd and which ones would be sent on to the stock yard.  Any cow that didn't have a calf was culled.  There were two of those. 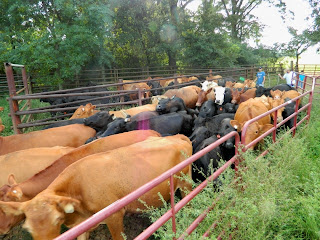 We also had 2 heifers that had to have assistance with calving, and by assistance I mean we had to "pull their calf".  Those two ladies left the herd too.  Other than that, everyone checked out pretty good.  All of the bull calves that were in the 6-7 month old range were also banded. 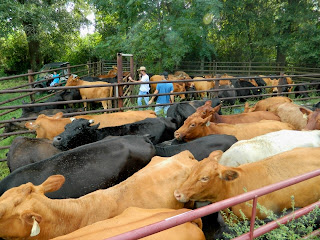 That there fella in the photo below got to work one of the cut gates.  He did an awesome job following his dad's guidance.  I could definitely see a lot of pride in his face when I mentioned that he was doing such a good job helping the men work the cows.  My little man is growing up way too fast!