I do recall, sometime back in August, really complaining about how hot it was.  I even remember saying something about how I couldn't wait for winter to get here.  I even mentioned that I had hoped it would be an actual cold winter to savor, due to the fact that we generally don't get to experience what most would consider winter.  Most of the time here in south MS we are able to wear flip-flops and shorts.....I'm not kidding.  Well folks, I'm here to tell ya, this winter has been one of the coldest I've experienced ever.  That is, if my mind serves me correctly. No flip-flops and shorts for me! I will say that I'm not going to complain one bit about it because I know that when those sweltering hot temperatures of summer roll around, I'll be longing for these colder days.

Last week we had some unusually freezing cold weather; several inches of freezing rain.  I snapped very few photos; to be quite honest my hands were killing me due to the cold.  Some of these photos are what I took with my phone to send to Shane while he was at work.  Thank goodness for technology!  I can't tell you how many times our cell phones' ability to send and receive photos/texts have kept things chugging along here on the farm.

Our goats and cows were hunkered down in the brush in the back forty while the winter precipitation was falling.  They weren't coming out of their covering.  I couldn't blame them either!  I went out to check on the horses, because I knew they had no covering.  This is what I saw on one of the horses. 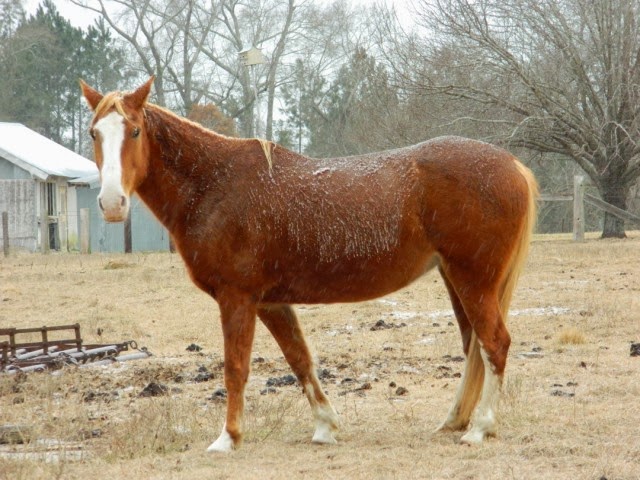 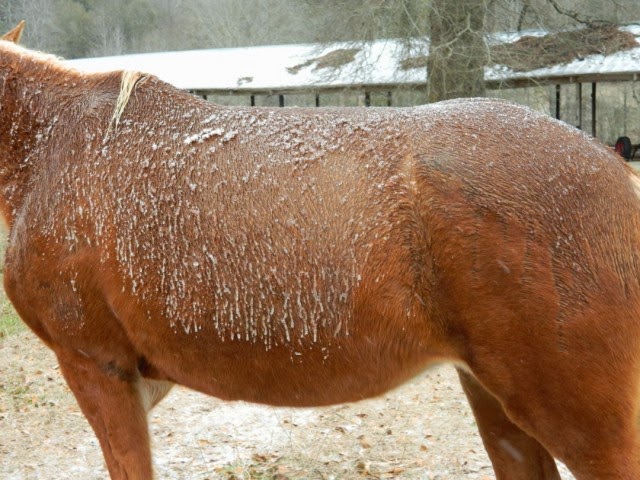 Icicles! This is not a normal thing for my eyes to behold.  All I could think of is, how cold that had to be!  I moved the horses into an area that had shelter and do you know what? Those crazy things wouldn't even entertain the idea of getting out of that cold stuff. They ran around bucking and hopping like a bunch of kindergartners that had just been allowed to go the the playground.  It was a sight to see.

Our goats and cows were hunkered down in the brush in the back forty.  They weren't coming out of their covering.  I couldn't blame them either!

I'd told the kids they would be able to play in the snow later in the afternoon.  We waited and waited to see the white flaky stuff falling from the sky.  The only thing that continued to fall was the freezing rain/sleet.  Can you say disappointed?  My 2 kiddies were beyond disappointed that night when they realized we weren't going to get any snow.

The next day Shane went out to check on the tub of water he had set out for the horses.  He had a water hose draped over into the tub and left the water running so it wouldn't freeze up.  Well, guess what? The water froze and we weren't able to get the hose out of the tub.  My Revlon hairdryer came the rescue.  Shane used it to melt the block of ice enough to get the hose out of it so he could get the water going again. 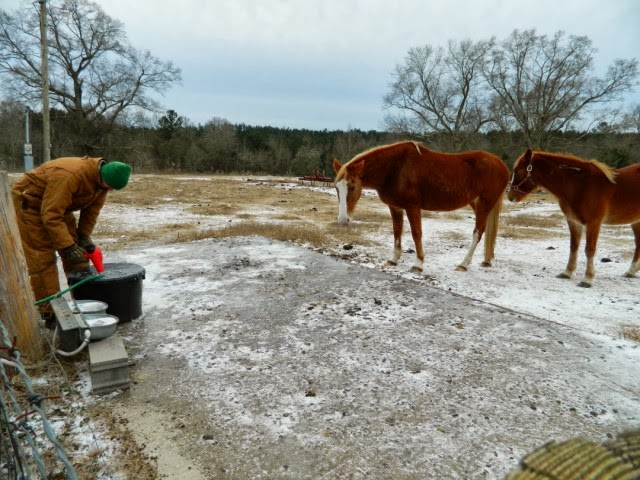 I just found it very funny to see the farmer out in the horse pasture using a hair dryer.  Of course, I had to take photos of that! 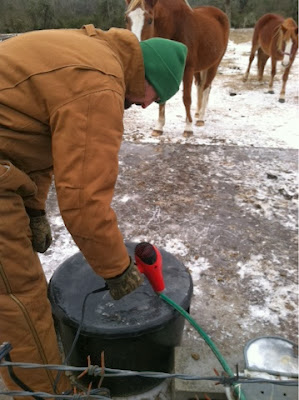 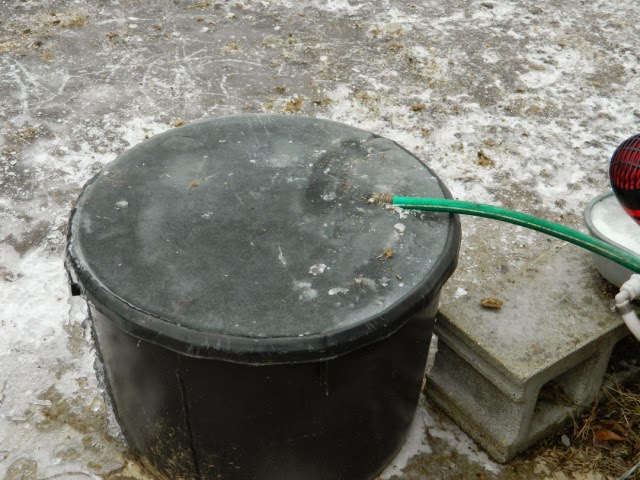 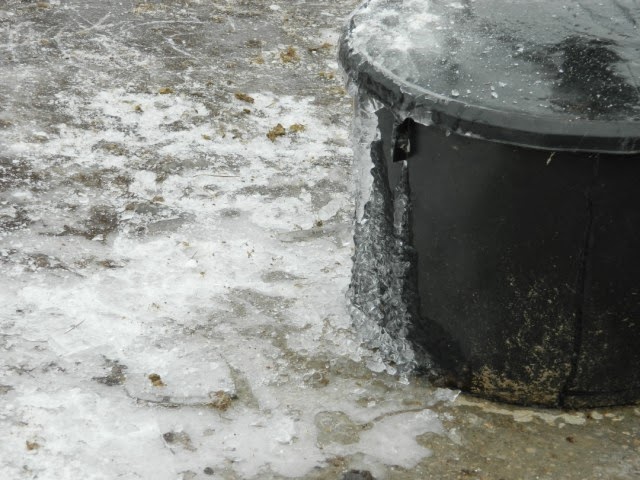 Water did spill over the tub, as you can see in the photos above.  It caused a thick layer of ice to form on the concrete pads we have at our water trough.  The horses walked ever so carefully across the ice to get to the water. When one mare decided she was going to be a little bossy and make that sudden movement towards the other horses, she started slipping and sliding.  However, she did manage to recover and keep from falling. 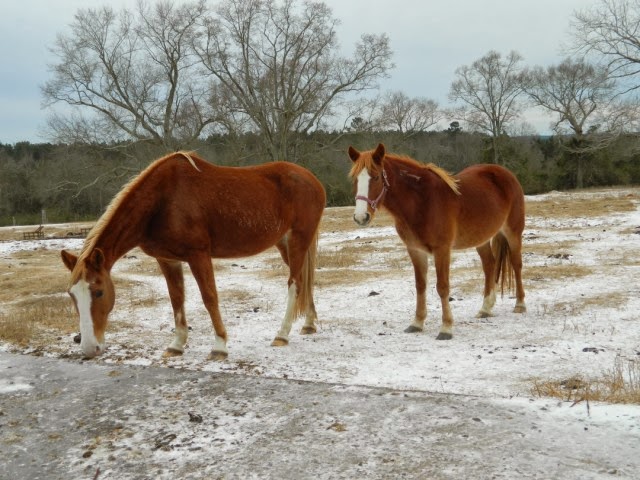 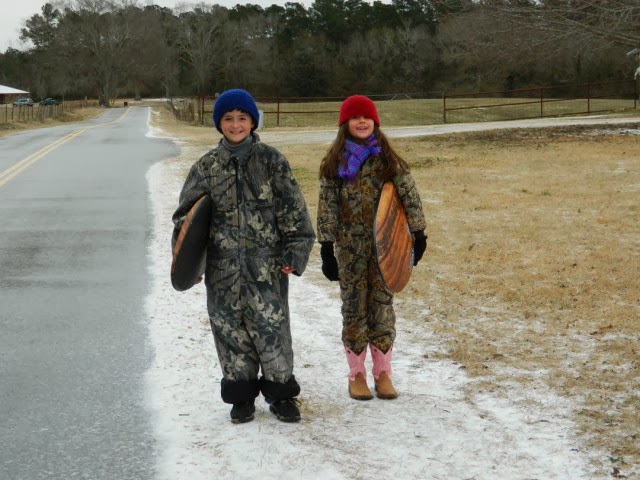 Now doesn't that look like fun? All I could think of was how badly I would hurt myself if I had even attempted this move.  They would run and jump on those boards over and over and over again.  Many giggles and squeals of laughter were had on this day.  Even though they didn't get any snow, I'm certain this day will be a memory forever etched in their minds. 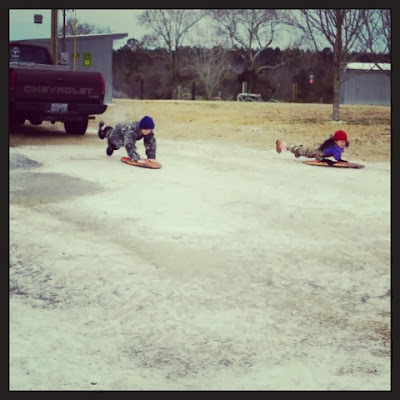