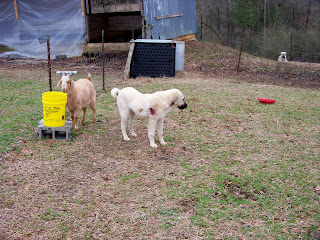 We've got a new LGD, Sinbad, started on the farm. Sinbad was put into a small pen with a few goats to get him bonded with them before put into a larger pasture. Obviously one of our other LGD's didn't like the idea of him being in a pen with "their" goats. Sinbad must have gotten too close to the fence (it joins our main pasture) and somebody got a hold of him through it. There was hair and blood on the fence, so we know where it happened, but not sure which one of the 3 LGD's did it. Shane believes all of them got in on it. He called the vet and he gave us a spray to spray his wound with as well as antibiotics. It is really looking a lot better. I am posting this picture from a distance, because an up close photo may be too "grotesque" for some. He had 3 different wounds, but the one on his side was at least 5"X4"; you could see the muscle. It was awful. I am really amazed how well it is closing up without having stitches. I will put another photo up when I get one of how well it is healing.
Posted by Ashley at Sunday, February 21, 2010