I know... I know....It's been a while since I've put any news up  lately.  Sorry.  Baseball season is in full swing, so it's been a little busy around here.  But I will do my best to fill you in on things going on here at the farm.
Yesterday, I turned the cows out into the front pasture for a couple of hours to let them graze on some clover and rye grass.  The back forty doesn't quite have enough green.  To start off,  I stood near the catch-pen and called them up.  Some came running quickly up the hill, some were not as quick.  When they came to the catch-pen (as we call it) or corral,  they all stopped and tried to figure out what I wanted them to do.  Once one made the move to come on through, that was all she wrote!  They came stampeding through to get to the greener grass on the other side. 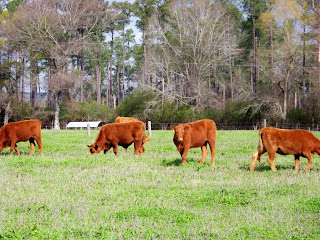 While the cows did their grazing for 2 hours I pulled myself up a 5 gallon bucket and had a seat!  I put myself in the kid goats play area to try to get some pictures of them, but they were a little weary of me.  I came to them when they were first born, put them in a five gallon bucket and tagged their tender little ears.  I guess I'd be weary of someone like that too!
The kids were scattered everywhere.  This spot seems to be the "popular kids" hangout.  They are here everyday soaking up the sun or hopping skipping and jumping off of the little bluff. 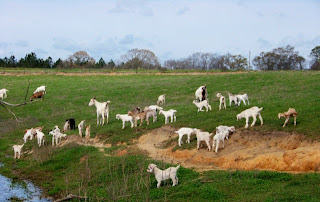 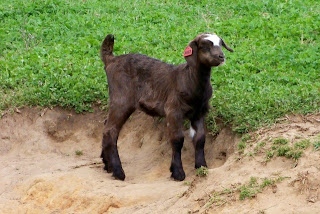 This little doeling decided after posing for me that she needed to lie down.  Now this is the life!  While she lay there to get a little rest, she decided to nibble on some clover.  She didn't even have to get up.  You can't ask for better than that! 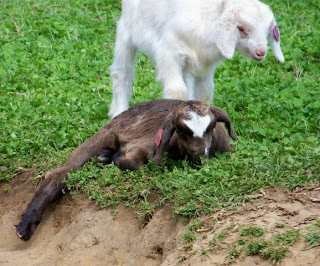 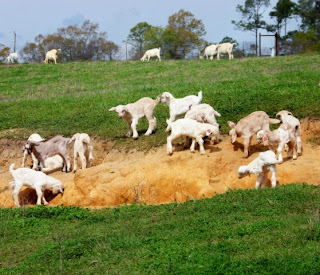 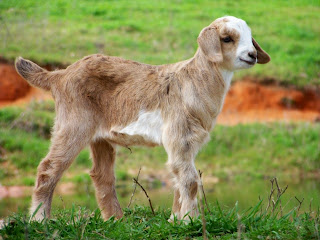 After spending my 2 hours with the goats, it came time to push the cows back into the back 40 again.  I went to the gate to open it for them to go through, and I about had a heart attack!  I stepped off of the mule to get the gate, and I saw something move on the ground.  When I looked down I saw a snake....My mind couldn't process what kind of snake it was, was it a poisonous one.......All my mind did was tell my mouth to scream.  I let out a scream from the bottom of my soul that I do believe was heard all the way to Texas!  When I finally recollected my thoughts, and my legs (they had turned to noodles) I realized that it was a chicken snake.  A snake none the less, but I wasn't in fear for my life.  I remembered that I had my camera on the mule, so I thought I would bravely get close to get all of my loyal and faithful readers a nice picture!
Now wasn't that awfully nice of me to do that?  The snake was a little camera shy.  He started the slither off, so I had to move quickly.  He slithered right on over to a bucket that was laying on it's side, and went in.  Me being the brave one that I am, walked right over to that bucket, squatted down, and peeked my head in with the camera in front of my face to get an ever better picture. 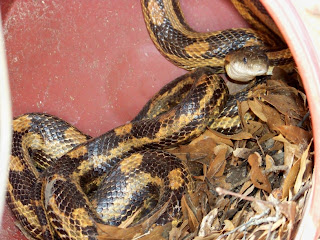 He was staring right back at me.  Oh yes, we were looking at each other eye to eye.
With that being said, I guess I should be a little honest.  If it weren't for the zoom on my camera, you guys wouldn't be so lucky to see these shots (lucky you, huh?)  I stood back at a VERY large distance to take these photos (better safe than sorry).  I don't care what kind of snake he/she was, because a snake is a snake to me.  They give me chills and cause me to dance around like a lunatic at the sight of them, as well as holler/scream like you've never heard before.  I also do that with spiders as well.  I just couldn't go on and let you believe that I was that brave.....Now my husband.....that's another story.  If you aren't familiar with our rattle snake encounter, click here for the story.  Beware, it's not pretty!
Posted by Ashley at Tuesday, March 15, 2011