Shane bought Mallory her very first girlie fishing pole the other day and took the kids fishing down at one of our ponds.  It was fun to watch Mallory learn to cast and reel from her dad.  She paid very close attention to all that he told her.

Dillon, on the other hand, is an old pro.  He finds the "honey holes" as he calls them and will catch fish left and right.  We stocked the pond about 2 years ago with bream, so we are doing a catch and release if the fish are still small.  That is all that Dillon was catching.  I don't know if the low level in pond water in addition to the severe heat has caused the fish not to do real well.
One thing the old pro fisherman Dillon isn't too keen on, is removing the hook from the mouth of the fish.  If you notice in the photo below, he doesn't like holding onto them.  If they started squirming in his hand he would let go of them in a heartbeat. 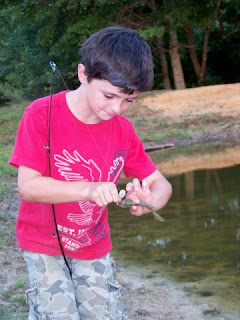 Toward the end of the fishing excursion, he was more confident in his hook removal skills.  He didn't even flinch a muscle when they squirmed about in his hand.  I enjoyed watching him overcome the fear and gain confidence in learning to do it himself. 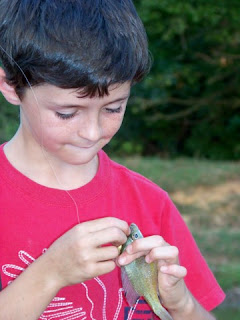 Mallory had such a big catch that it broke her line, so she went out to try to get it....Can you guess what she caught? 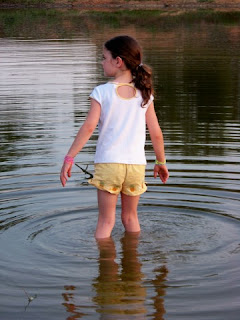 If you guessed a limb, you got it right.  Shane reeled the limb in closer and the line broke.  She wanted to get her lure, so she waded out into the pond to retrieve it.  She said the limb was slimy and wanted to give up, but she kept with it for the sake of getting her one and only lure back. 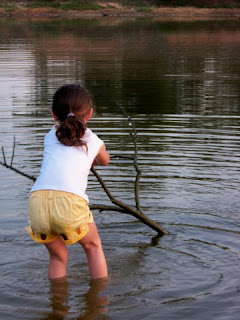 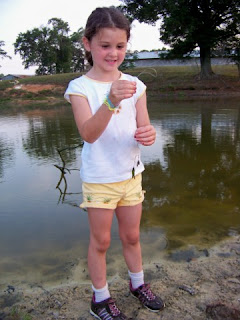 Email ThisBlogThis!Share to TwitterShare to FacebookShare to Pinterest
Labels: fishing