Yesterday we weaned our kids from their dams.  There ended up being 42 that were from our registered stock that we collected weights on.
Our catch pen was originally for cattle only and had to be modified for goats.  Shane ran some panel wire with a few t-posts to support it down the middle of one of the holding pens.  This gives the goats less room to turn around before going down the chute.  It works out really well once the goats started heading that way, Dillon would close the gate to keep them going forward instead of backwards.  Every now and then Shane had to help Dillon because he would get overwhelmed by all of the goats.  I think its a good thing for our children to help out, it teaches them some very invaluable lessons.
This is the view from the front of the runway.  The blue thing is a squeeze chute that is the final stop for the goats.  Once they get here we are able to do whatever is needed to the goats.  It will even tilt on its side, if the goats hooves need trimming.  Luckily we don't have to do that hardly at all. 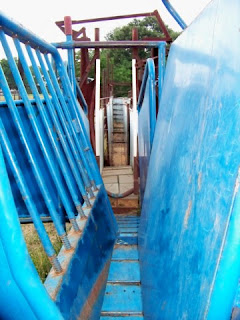 Maybe this picture below will give you a better idea of the squeeze chute.  It closes tight on the goat to hold it in place; hence the name "squeeze" chute.  I have to say, it doesn't work real well with smaller kids as it does with grown does. 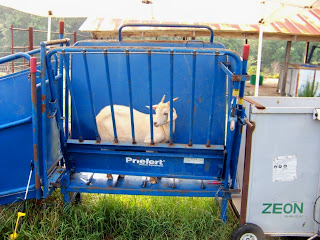 If you will notice at the front of the squeeze chute, there is a white box.  This box was made by Shane to put our livestock scales in to weigh the goats.  There is a gate on the other end to keep the goat in.  When we get their weights from the digital read-out, we just open that gate and let them out.


If you'll notice below, there are wheels on one end of our scales "contraption".  This enables it to be moved pretty easily.  The scales themselves can be heavy to carry around ( for me, that is) and it's really helpful to have something to contain the animals in to get their weights.  You can't make a goat stand still on those scales without something surrounding them. 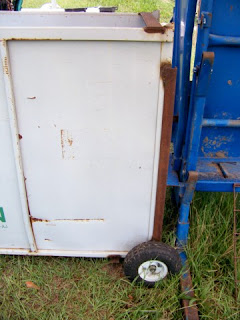 We decided to try to get weights on our bucks.  We have 3 herdsires and a couple of young lease bucks.  Shane had to wrestle those smelly bucks to get them in the small box.  Their horns were too wide that he had to force them to turn their heads sideways to get in.  Once they were in, they were able to put their head out of the top and stand still in order for us to get their weights. 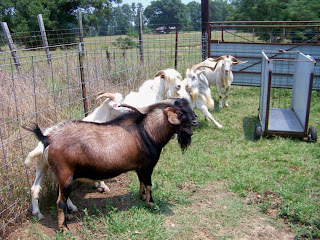 One thing is for sure.....the scales don't lie.  You can look at an animal all you want and try to guess his weight, but you may not even come close.  Here are their weights as follows:
Speaking of weights, the weaning weights from yesterday ranged from 59.0 pounds to 26.6 pounds.  Now it is time to start marking off the lower ones with red and hauling them into town, while the others get to stay to see how they fare on their 150 day weights.
Posted by Ashley at Monday, June 13, 2011