Our past week's happenings

The flooring is officially complete! We are getting so close....I'm hoping that we get to move in at least by the middle of July. Fingers are crossed!  Our stove and microwave should be arriving any day...Yippee!


I am sooooo going to enjoy having these two big windows.  This house is located more in the center of our farm.  All of the views from these windows are of the pastures.  That will be such a nice change.

We've also been seeing a lot of these kind of skies; and I'm so thankful to the good Lord for sending us all of the rain that we've received.  We have really needed it.

This past week, we had to round up all of our bucklings to make the final decision of  which ones were to go to the Oklahoma Forage Buck Test at the Kerr Center in Poteau, Oklahoma.  We were in a pasture without a catch pen, so Shane decided to use this small pen that we have out in that pasture (we'd had our ducks out there in it so the LGDs could get used to seeing ducks).   Davie, our border collie, went out and rounded up the bucklings and herded them right to the pen. 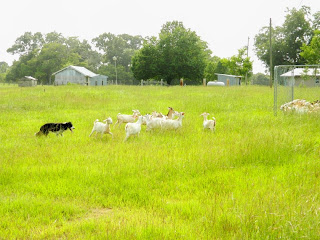 The only problem was that they had to get into that pen by way of one small door.  Of course there were some that wanted to run around the pen and try to make an escape, but Davie kept after them and eventually got every single goat in that pen.  Shane would keep the door closed to keep those that were already in from getting out.  When Davie would get close with the others, he would open it so they could get in.  I'm telling you, that border collie is priceless!  I mean she has saved us many hours of frustration on getting those goats caught up.  There was a time when it was just Shane and myself on foot, with Shane being armed with a lasso.  Those days made for many laughs.  Shane did get pretty good at  lassoing  goats.  It was amazing... Of course we only had about 12 -15 goats then.  I couldn't even imagine doing that now. 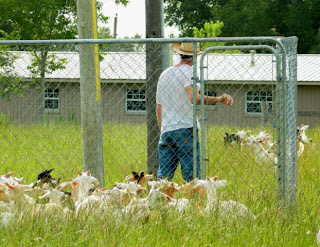 It's much easier to watch in amazement at how one dog can get out there and round up 100 goats and drive them into any area you want them to be in.  Truly amazing! 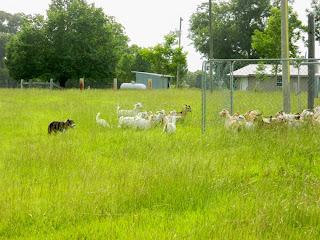