Today, we would be heading out to take our selected bucklings to the buck test in Oklahoma. Notice that I said we would be .  This year is the first time in several  years that we will not be taking any bucks to the test.  We had picked out a few after we weaned them based on their dam/sire, weaning weights, dam's FAMACHA scoring over the past year, etc. etc. etc. ; but this years crop just didn't cut the mustard.

I'll have to be honest with you, this years kid crop has had it's share of disappointments.  Each year, we expect to have a crop better than the last, due to our strict culling.  This year, our group average 90 day weight as a whole was pitiful.  They just didn't seem to be handling the stress of weaning either.  We wormed all of the kids with Valbazen because many of them had evidence of tapeworms (looks like rice in their poop).

Several of our does looked like they had been raising 5 kids instead of two this year.  Last year, we left the doelings on their dams until they were about 5 months old.  The does really didn't have a chance to bounce back before being bred and going through the winter pregnant.  We feel like that contributed a lot to the quality of kids born this year.  Of course, this is all hindsight. 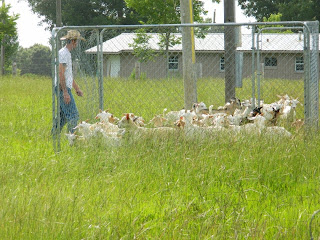 It just so happened that a man stopped by our house the Friday before our work day.  He said he drives through often, and wanted to know who owns the goats out in the pasture.  I told him that my husband and I did.  He said that he had just had 12 acres fenced in and he needed some goats to help clean it up.  I told him that we didn't have any to sell at the time, but that we would be working them the next day and we may have some that we are going to take to the stockyard but that they would be culls.  He wanted me to take his number and have Shane call him so they could discuss it further.  Long story short, we worked goats and when it came to the kids, several of them were scoring 3-5 on the FAMACHA chart.  Some were still showing signs of tapeworms.  Shane and I stood there and discussed whether it was even worth keeping any of these kids.  We made the decision that we were going to load them all up and take them to the stockyard.  We went through our kidding records and weaning records and picked out 4 doelings out of those 42 kids to keep as prospects, the rest had to go.  We have learned the hard way that when you have some kids that don't do as well in the beginning they will only fall apart again when they have the stress of kidding as mature does. With that being said and ALL the hard work that we put into our herd we had a total of 66 kids and only 4 doelings made the cut.

So when we came home after working to have lunch, Shane called the guy that had stopped by Friday to tell him the situation.  He arrived not long after the call was made and he wanted to buy all of them.  I mean every single one of them!  Bucks....does.....he didn't care.

Were there more than those 4 doelings that would have been "good" goats?  Probably.......but we are trying to raise more than "good" goats.  To sell registered seedstock, we should only keep the best.  Of course, "the best" varies from breeder to breeder.  We've also learned that the hard way.  Pedigree doesn't amount to a hill of beans if they don't perform well.   Performance is the most important factor that we use to set the standards when it comes to seedstock selection.  It is tough to make those kind of decisions, but it is so worth it in the end.
Posted by Ashley at Saturday, June 23, 2012