Saturday was a big work day here at our farm.  We (I use the term "we" loosely) worked all the cows and checked body conditions, and their mouths.  It was decided that all of the broke mouthed cows would be culled and sent to the stockyard on Monday.
﻿ ﻿Davie and Alex, the border collies, were able to get in there and get a little work done.  As you can see by the photo below, they are ready and willing to get in there to help out.

This is a picture of a cow that would be considered to be a "broke mouth" cow.  You can see that she is missing some of her teeth.  This is commonly found in older cows, and obviously causes this cow to not be able to maintain her body condition.  This is due to not being able to pull at the grass as well with those missing teeth.
Shane believes that salt blocks causes broke teeth due to cows biting the blocks.  This of course, is just his opinion.  That's one of the reasons that he uses loose minerals for the cows.
We had some really good help while working the animals too.  Dillon really jumped in there and worked real hard.  He got up that morning and dressed himself and was ready to go to work! 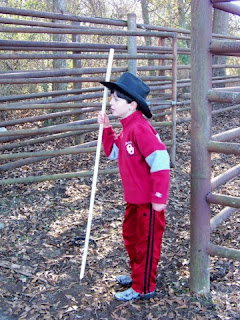 He was the gate keeper and would open the gate and let the cows back out into the pasture after they were run through the chute. 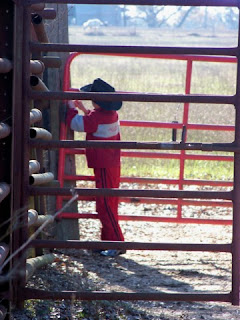 Mallory tried to stay out of the cow's way while hanging out above the action, on the fence. 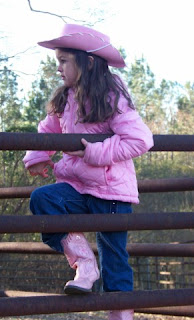 Then we did FAMACHA checks on all of the goats.  Our does should start kidding around the end of February.  We had to take it easy on them, and not run them through the "alley" in the catch pen.  We just funneled them down to a smaller area and Shane would catch them one by one.   The checks went real well, except a few of the commercial does needed deworming.  We've had them about 6 months.  We'll have to see how they adjust to our management style.  Some have done exceptionally well where others not so much.  You can definitely tell a difference in our Kikos when compared to the commercial.  It's amazing! 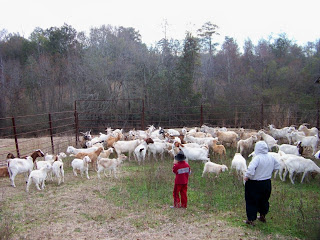 We also changed out ear tags on quite a few of the does.  We purchased a few commercial and some percentage does, so we are planning on color coding the tags to easily identify what percentage they are.
Once again, Mr. Dillon got right in there and worked those goats like a real "goat rancher."  I think the hat did it for him.  He didn't take it off all day! 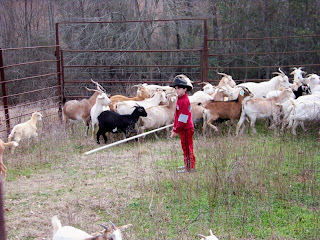