We have an old hog barn on the farm, that is vacant (except for Davie and Alex, our border collies) and in need of some re-working.  The boards on the backside were falling off and rotting.  This side borders one of our pastures, so we had to patch holes, so none of the small animals could get out.  Shane decided to put up net fence all the way across the back side.  The picture below, is what it looked like while the demolition was in process. 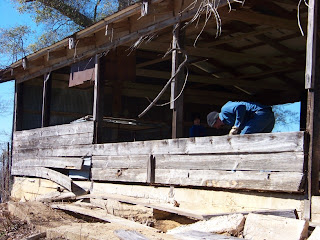 It is called the hog barn because Shane's grandpa had hogs back in the day.  He had a concrete slab poured at an angle to where it could be washed and all of the "muck" would wash down the backside of the hill.  It probably was a really nice setup, but he didn't stay in the hog business very long, so we didn't get so see it in use. 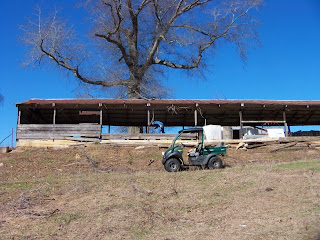 This is the finished backside with the net fence.  We're not sure what this barn will be used for.  Shane and I are in disagreement with what we should do.....He plans on making it a working area for the goats, and I think it would be a perfect place to put rocking chairs.  I guess you would have to see the view from up top.  Behind the hog barn is a steep hill and a stream cuts through.  I could just imagine us sitting in our rocking chairs sipping on some sweet tea watching the goats, cows, horses.  In reality though, Shane will probably end up with his idea happening.  It's more practical.....I mean really, we don't have time to sit in rocking chairs and sip on sweet tea that often.  Besides, his idea would get us out of working goats in the sun in those HOT summers.  One thing I forgot to mention was that the roof of the hog barn is insulated with styrofoam, and it really makes a big difference in the temps during the summer!  Anyway, here is what the back looks like completed. 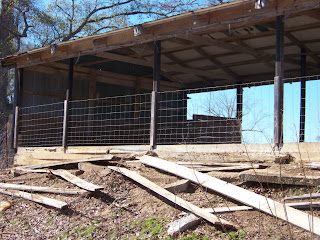 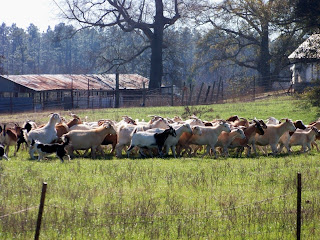 I also wanted to put some photos of our border collies working the goats. Davie, the oldest, was trained by Shane two years ago. Alex, Davie's daughter, is getting a little training. We have this spot of rye grass/clover mix that hasn't been grazed. Shane started letting the does go in and graze for about 2 hours. Then he lets the border collies round them up and push them back to their pasture. It never gets old watching those does do their work.....I can remember a time when it was just Shane and I on foot trying to round them up and push them to a new location. If you know anything about goats, that was super-duper hard work.   They do not move like cattle.  Those goats whipped our tails. Now they don't stand a chance with the Davie or Alex! 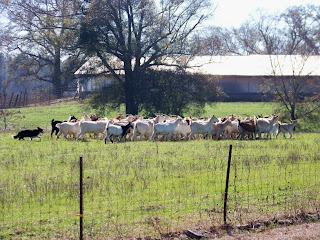