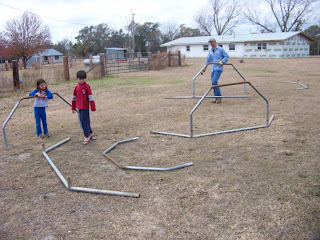 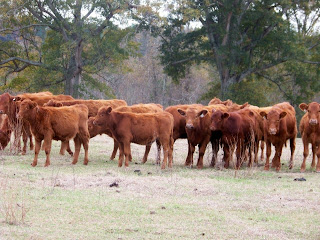 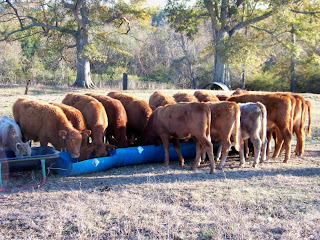 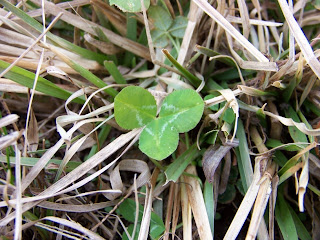 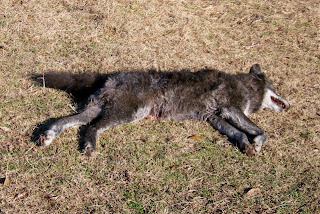 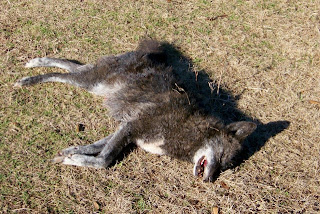 We've gotten calls from folks, who have goats that were thinking about getting an LGD.  I would have to say it would be a very wise investment.  Some may never have any issues with predators, but all it will take is one night for them to put a hurt on your livestock.  I am so thankful that we have ours.
Posted by Ashley at Thursday, December 23, 2010 1 comment:

Will he stay or will he go?

We are in a kind-of horse dilemma here.  We have 5 horses, and at most we ride 2 at a time.  The other 3, usually the same 3, are staying out in the pasture with our cattle and getting their bellies full.  We have this horse named Shaggy that was purchased over the summer, that we had put on Craigslist to sale about a month ago.  Shane decided to ride him one last time, and like magic, he pranced around the field and caused Shane to really begin to like him more.  After that ride, Shane came inside and removed the post (we had already received 3 phone calls in just a few hours).

Can you imagine what that horse did to cause Shane to decide to keep him for a little longer?  He had a gait about him that Shane felt like he could possibly be a Tennessee Walker; just needing a little fine tuning.
Come to find out, he is a cross between a quarter horse and a Tennessee Walking Horse (so the owners before the previous owners had said).  He is a beautiful horse and has a very good disposition about him, but we have to get rid of some horses here!  5 are just too many!  Have you ever seen how much a horse can eat? 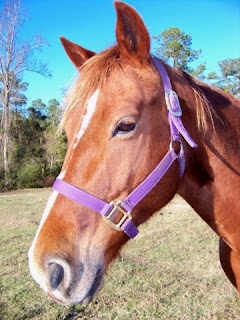 So we are not sure if Shaggy will stay or go.  But one thing I'm pretty sure of after talking with Shane tonight, he will end up with a Tennessee Walker, because he is hooked to that smooth fast gait.  So we may end up changing the whole group of horses we have.  Of course, Mr. Sonny will be staying here for now.  I have enjoyed riding him quite a lot.  He isn't too bad looking either!  Just take a look for yourself....
Posted by Ashley at Monday, December 20, 2010 No comments:

We had a visitor today!

While I was at the barn I happened to notice something moving in our front yard down the road.  I thought to myself....here we go again!  One of those crazy TX goats got out again!  The closer I looked, it was just too big to be a goat.  It kinda looked like maybe a calf had gotten out.  That was impossible for one to be in our yard though.  The field they were in was on the other side of the barn.  Anyway, I knew something was walking around on the other side of the pasture fence that shouldn't be, so I was trying to get a game plan on how to get it back in on my own.  Then I noticed one of our neighbors coming down the road, she stopped to let me know that I had a big boar hog in my yard!  Aha!  No goat or calf......but a hog!!???  She said that it walked down another road heading this way.  It walked over a mile to get to our yard.  Here  is a picture of it right off of my back porch. 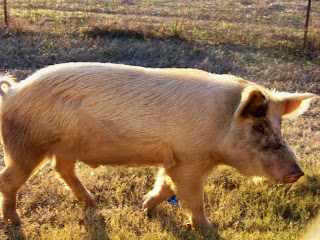 This thing was gigantic.  I was a little worried that it would be mean, due to all of the stories my mom told me about the wild hogs running through the woods when she was a child.  She said you could hear them coming through the woods and her grandma would holler for the kids to run inside the house so the hogs wouldn't get them.  As a child, hearing this story, I had a real fear of ever seeing any of those wild hogs.  On this day, I was just fascinated that this thing was in our yard eating acorns like this is where he belonged.  Our LGD's had other feelings about it.  In the picture below, you can see Jael and Kimba keeping a close eye on it behind their fence.
After he was finished with the acorns in our yard he decided he would head down the road.  He ended up getting to my pecan trees and stopping again to eat my pecans!  He was such a hog! 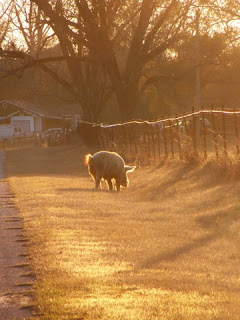 In the meantime I had called my neighbor to come check this thing out.....He arrived with a friend and they ended up getting him, if you know what I mean.
Posted by Ashley at Wednesday, December 08, 2010 1 comment: