A Chip Off The Ol' Rock

Lil' Rock, our very first horse to be born on the farm, had his 2nd birthday several weeks ago. We've always called him Lil' Rock....because his daddy's name was Rocky.  However, he had to have a different registered name, so his registered name is A Chip Off The Ol Rock.  I just love horse's registered names.  Although I have no idea about any of the bloodlines.  Some people get real creative with them.

I still remember the morning he was born.  I had been instructed by my dear husband to get my hands on him as soon as he was born.  We'd read of the theory of "imprinting" them.  His mother Dixie wasn't too sure about me messing with him, but I can remember petting all over him before he'd even had the chance to dry off.

Since he's the first horse that was born here, I'm not absolutely certain that handling him affected his disposition.  I can tell you that he is very gentle and laid back.  He doesn't have any sort of attitude issue like some of the other horses that we have owned or currently own. He has had to learn to stay out of our "personal space".  He did have the tendency to want to be right next to you; touching you.  He was corrected a few times and quickly learned his place isn't right on top of you. 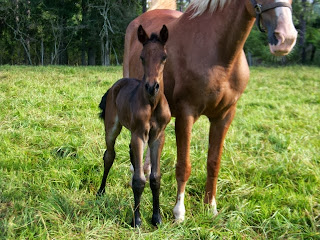 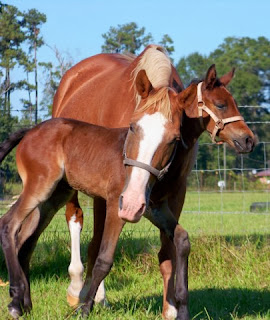 We've enjoyed getting to watch him grow and give him plenty of love.  We had him leading on a rope within his first few months of his life.  He was always a quick learner, and still is to this day. 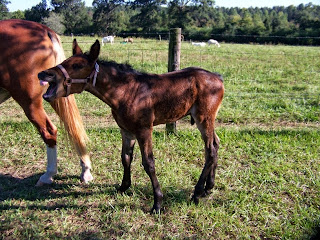 He's turned out to be a really nice looking horse too.  He's still intact; Shane wants to breed him to his half sister that we got last year.  I personally don't want him being the stud around here.  Horses are just so......well..... if you recall the last time we had a stud here on our farm it made me a little more than uncomfortable.  Anyhoo, Shane wants to really concentrate the genetics of their sire, so he's hoping for an even greater horse than Lil' Rock and his sister.  We shall see how that one goes :) 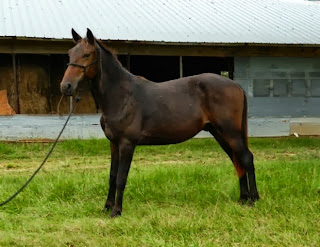 Shane is the only one that is riding him now, due to the fact that I am a big fraidy cat.  I've been riding his mother, Dixie.  She is really a great horse.  A little stubborn, as in wanting to go back to the pasture with the other horses rather than being ridden.  I'm not a dominating person, and I know that if I want it to work out with her, I have to make her do what I want.....not what she wants.....kinda hard for me, but I'm working on that.....a little.

Also speaking of celebrating birthdays, this girl right here celebrated another one already!  It is so hard to believe that another year has come and gone.  Where does the time go? 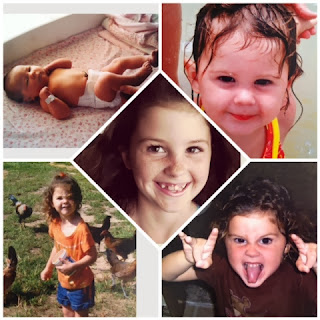 Now is the time to be thinking about whether or not your livestock is protected from predators out in the pastures.  I feel so sick when I hear about someone that has lost the majority, if not all of their herd overnight due to a predator attack.  We are able to sleep at night knowing that our animals are very well protected by our Anatolians from the predators lurking along the fenceline. They are the most amazing animal I've ever seen.  The guarding instincts of these dogs  is amazing!  Don't leave your herd unprotected another day or wait until it's too late.......

We have four 5 month old Anatolian Shepherd pups out of Sinbad and Cheyenne for sale.  You can click here to go to our website for more information and photos on our LGD's.  There are 2 males and 2 females available.  They have been with our main doe herd in a forty acre pasture along with both parents guarding the goats and cattle. 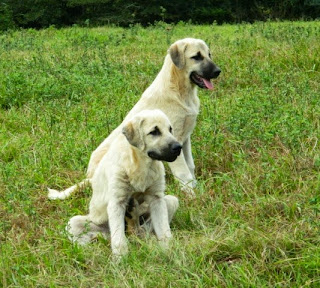 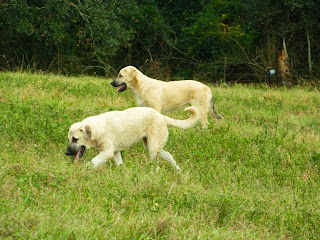 They have been exposed to horses too. 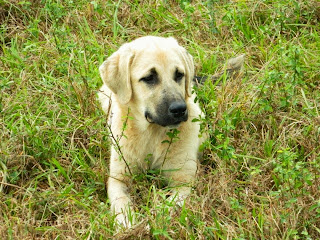 These pups were born and raised out in the pasture.  We usually try a absolute hands-off approach, but we've noticed some the pups will grow to be a little uninterested in having any human contact....which we don't mind too much.   We've had some customers that really don't like this behavior. They want a more hands-on approach.  With this litter we have been having more contact with them out in the pasture due to that.


I also wanted to share some photos that I'd found on my computer that are more recent of Sinbad and Cheyenne.

The pups have been vaccinated with a 5 way vaccine and also have received their follow up booster. They are dewormed on a regular schedule as well. If you are interested you can leave a comment below or email us @ deepsouthkikos@yahoo.com. You can also call or text the cell number that is listed on the contact page on our website found here.  We may be able to offer delivery.  Just contact us for more information.
Posted by Ashley at Monday, October 07, 2013 1 comment:

Back during the summer, we had one of our Mississippi Farm Bureau Women's regional meeting at Fulmer's in New Augusta. What a treat it was! Fulmer's is the home to the big MS Pecan Festival every year in September.  We were able to get a tour of the old homes and the antiques from days gone by that have been relocated to the Fulmer's homestead. 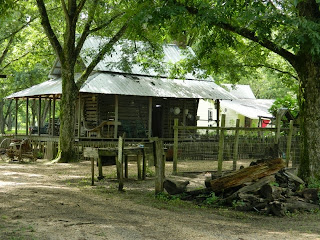 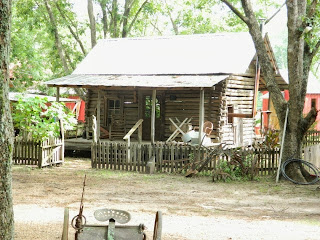 It had rained quite a bit the days before our tour, so it was somewhat muddy.  That didn't lessen the experience at all though.  It was cloudy too, so it enabled us to keep somewhat cooler from the usual heat and humidity that we encounter here in the deep south. 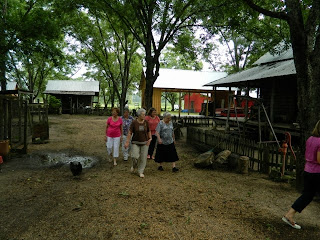 They had chickens, turkeys, and guineas roaming about.  They even had a few goats too.  The kids were interested in seeing if they had any kikos out in their goat pasture.  They did have one that appeared to have a touch of kiko influence.  You just never really know. 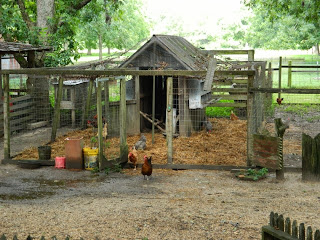 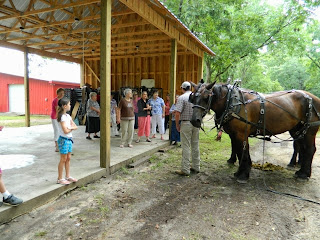 The horses were amazing! 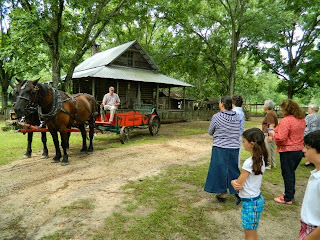 I don't know if it's obvious, but that little girl in the picture below couldn't wait to see the horses. 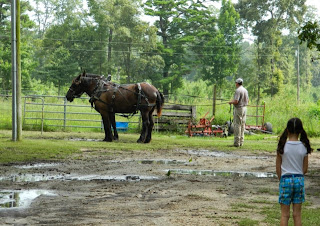 How nice it was for them to let her get up close to pet them.  That made her day.  She later told me that we needed to get some horses just like the ones we saw that day.  I don't think we're quite ready for that :) 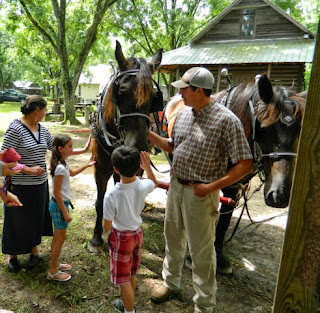 If you're ever over that way in Perry County, you should stop by.  They have a general store that is out of this world. Some things are a little pricey, but the quality is great. I love their oatmeal they sell in bulk.  It is better than any I've ever had!  They are such genuinely nice folks too.  I'm so glad we were able to have our meeting at their place! 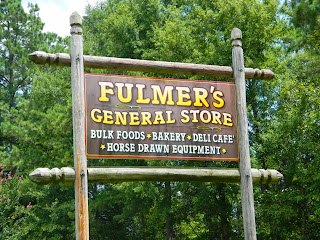 Posted by Ashley at Wednesday, October 02, 2013 No comments: