We have updated our website's for sale page, but I thought I'd include the pictures and a little information here on the blog too.

We have listed two bucks for sale.  They are both sons of our herdsire, CPK Rooster Cogburn.  These two bucks have been performance tested on our farm.  They have been pasture raised, along with their dams, since birth. They have survived and thrived all while living under the conditions that we have here in the humid deep south.


You can email us at deepsouthkikos@yahoo.com for more information or you can fill out the contact form on our website on the buck's for sale page.
Posted by Ashley at Monday, August 19, 2013 No comments:

Our trip to Ohio Part 1

Back in the middle of July, we went to visit Shane's family in Archbold, Ohio.  It was a 16 hour drive for us, so we broke the traveling into two days.  Shew!  Can you imagine what that was like for the two kiddos? I packed many activities, snacks, movies, video games. They were troopers and did really well for their age.

The day we arrived to Ohio, we attended the Hesterman family reunion.  We walked around and were able to look at old photos that were on display.  I took a few snapshots with my phone of some of my favorite ones.  So the next few pictures will be a photo of a photo :)

These are some of my favorite photographs of Shane's grandpa and his siblings from when they were younger.  The photo above appears to be a merry-go-round with all of the kids seated on it.  The photo below made me chuckle when I saw it.  The boys look to be playing cowboys.  Look closer and you can see a lasso around the neck of one brother while being held a gunpoint.  I rarely ever see kids playing like this these days.  Shane's grandpa had told me of how much he looked up to the cowboys in the movies like Roy Rogers and Gene Autry during his childhood. 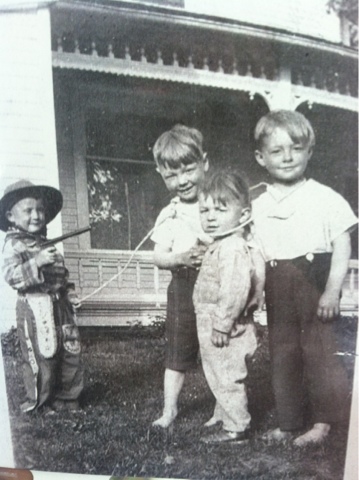 At the reunion, they had a map of the United States for us to push a thumbtack for where we traveled from.  I had a little help pointing out our location.  You can see, we were the only Hesterman's from Mississippi.  The concentration of black thumbtacks is close to the part of Ohio where the reunion was held.  As you can see, there are quite a few Hesterman's scattered among the US. 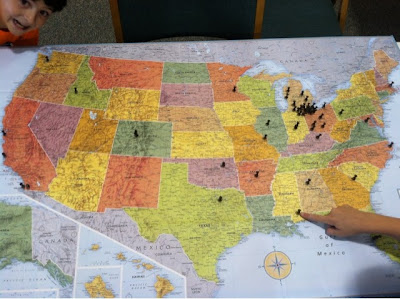 This was a family tree that someone had on display. 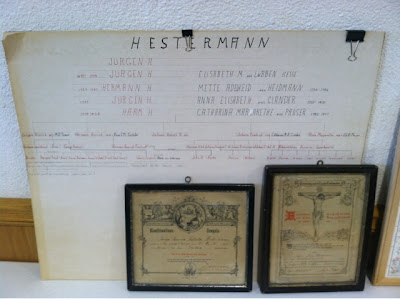 Shane's great-great-grandfather came to the US when he was a child from Germany.  Some of the documents that were on display, were written in German....I couldn't read a word of it.  Shane's grandpa can still speak German.  Although he was born in the United States, he said that he grew up speaking German; German was spoken at home on their farms. They had to start speaking English at home though so they could complete school.  Shane's grandpa was actually held back in the first grade
because he could not speak English.  One summer he said a prayer in German that he remembered reciting as a child.  It was very fascinating to me!  I just wish I could understand it :) 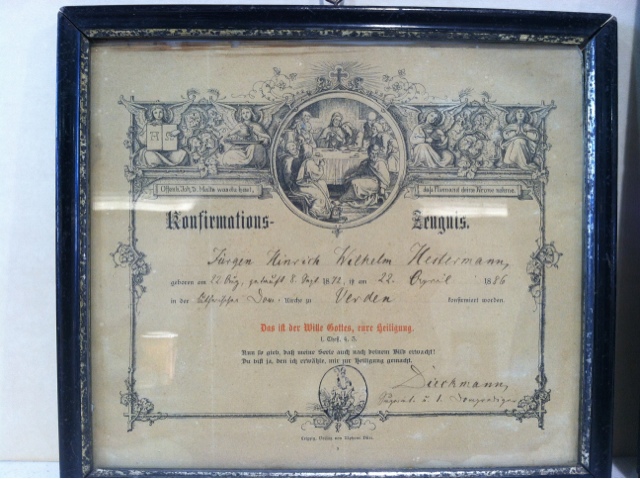 This photo was taken at the reunion.  Shane's grandpa is seated on the front row.  He is 2nd from the left.  I am so glad that we were able to get the chance to attend this year. 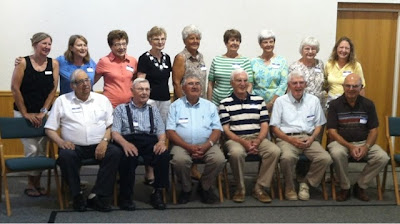 Also while we were there, we made the trip to Bryan, OH to visit the Spangler candy factory.  They gave a tour, but we weren't allowed to take any photos in the warehouse or where they make the candy.  We actually didn't get to see the candy being made due to regulations, but you could smell a sweet aroma in the warehouse from towers of candy-filled boxes.

They had a museum inside full of Spangler history.  When I saw these Astro Pops, it took me back to being a kid.  I would be so thrilled on the days that I had "candy store" money because I knew I'd be able to get an Astro Pop.  I'd forgotten about them until I saw this package in the display case.  Shane and I were discussing how sharp of a point it would get if you didn't bit into it.  I guess it was a hazard and they can't make them anymore. 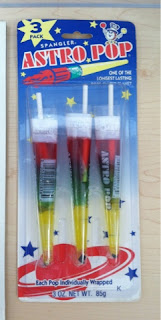 I saw these on display and couldn't help but thing of how the times have changed.  For starters, you can't buy a pack of candy for 3 cents and you certainly don't see candy displaying the likeness and brand name of cigarettes. 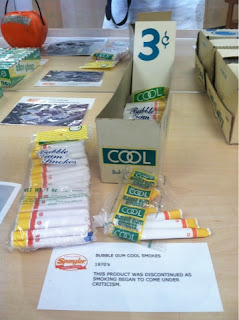 They even had DUM DUM pop scented candles for sale.

Samples were available everywhere you turned.  Can you tell that a certain someone helped herself to several samplings? 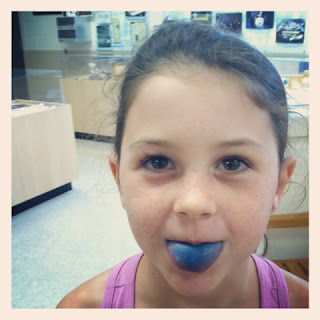 This is all I have for now, but stay continued.  I have more photos to share of our trip to Ohio.  God bless you all this week.  Have  a good one!
Posted by Ashley at Sunday, August 18, 2013 No comments:

As the summer heat rages on, I keep suggesting to my dear husband that we need a swimming pool.  After each suggestion, Shane will reply "We already have 2 pools."  After his reply I am usually rolling my eyes at him, because we DO NOT have 2 pools. In the photo below, you will see one of the pools my husband is referring to.


Now does this look like a swimming pool to you?  I think not!  Our cattle enjoy it very much as you can see in the photos, but I'm afraid I will not find it as refreshing as they do.  This particular "pool" is also home to our last little duck.  Do you know how messy a duck can be?  I learned quickly how messy they are when we decided to put a pool in our back yard and keep them there until they got rid of their downy coat of feathers. I tell you, all they do is constantly poop!  I never got a break from trying to keep that little pool clean.

Of course the cows don't show any "swimming pool etiquette" either.  If they have to go, they surely don't hold it in.

If you can't tell by this post, I am absolutely, most definitely not going for a swim in our ponds.   Can you blame me?  I plan on continuing to casually mention how much we need a pool, as often as I can :)

Have a great weekend y'all!
Posted by Ashley at Saturday, August 03, 2013 No comments: