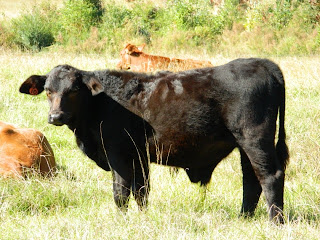 I got out today with my camera in hand and took some pictures for my dear husband of the 6 month old steers that we have for sale.  I must say it was quite breezy and chilly.  Although the sun was shining, that wind was blowing straight through my clothes.  Of course I wasn't appropriately dressed. The sun tricked my mind into believing it was warmer outside that it was.  I guess fall is officially here in the deep south! 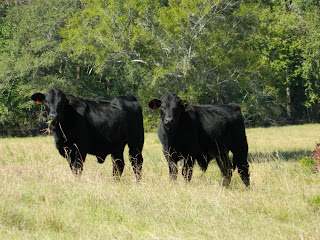 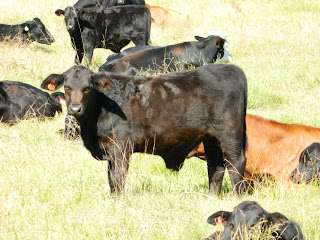 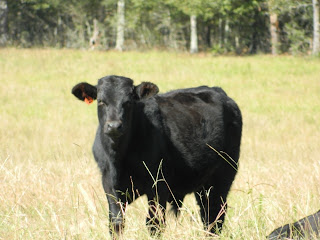 Shane is going to try to sell the steer straight off of the farm this year.   Most of the time, he just makes one big load to the stockyard.   He always likes to try new ways of doing things.  His motto is you won't know until you try it. 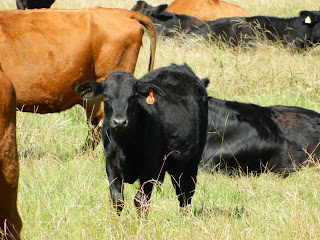 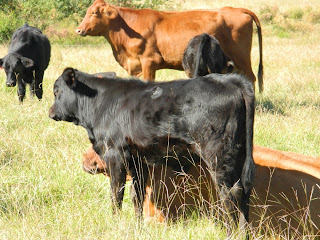 I thought I would do a post about how we give medication orally to a goat. I saw someone trying to use a regular disposable luer lock syringe to administer medication to their goat, and I wondered why they didn't use a feeding syringe with a drench nozzle. Now if you like using the disposable syringe, that is fine. We used to use one in the very beginning because we didn't know about a "drencher" as we call it. That is the purpose of my post....to let those who may not know about drenching a goat.  We very rarely have to medicate our herd since we have culled out the weaker ones.  We do a monthly FAMACHA scoring on our does.  These scores are logged down on a spreadsheet and will help you see which ones are the weaker ones.


Crazy Horse was our "volunteer".  If you will notice the syringe in Shane's hand.  It is called a feeding syringe in the Jeffer's catalog.  This particular one is a 20 mL.  ( I am not getting any sort of discount or kickback from Jeffer's by mentioning their products or company name.  We just happen to order from them most of the time. ) 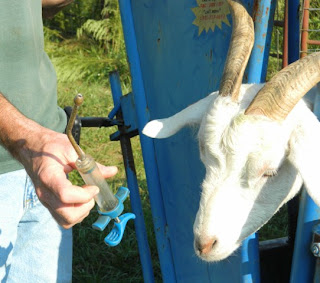 After pulling up the medication in the syringe, you just open the goats mouth, and put the nozzle to one side on the back of the tongue.  ( Be sure that you do not put your fingers near the goats back teeth because they are very sharp.) 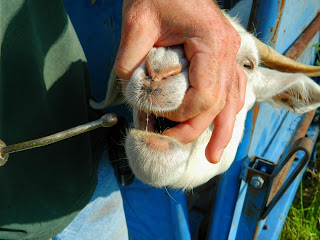 Once the nozzle is in place, slowly administer the liquid.  It's that easy.  Hopefully you will not have to do this very often, but it is better to be prepared about the how-to's. 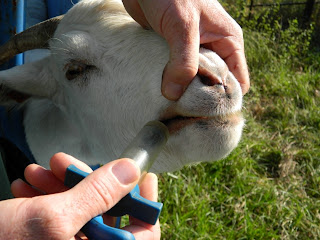 When it comes to medications and administering them, you should consult your local veterinarian should you have any questions or concerns.  I just wanted to share my opinion on how we administer medications to goats.
Posted by Ashley at Wednesday, October 24, 2012 2 comments:

This past Saturday we worked our cattle and weaned the last group of calves, banded the bull calves and ended up having time to brand the cows. 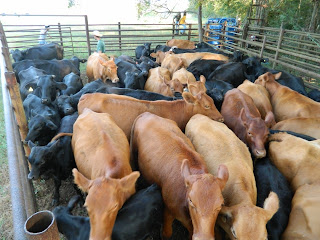 We had a young man, Undray, that lives out in this area that wanted to come and help out.  He said that he was interested in farming.  What better way to see what it's all about that to visit a working farm?  In the photo below, Shane was banding a calf.  Undray, would get the bands ready and hand the bander to Shane after each calf was ready.  I was very impressed how well he caught on to working the gates and just his attitude in general of working the animals. 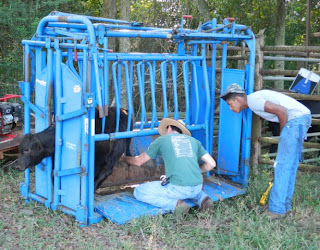 After sorting through the calves it came time for Shane to get to try branding.  We have always put ear tags in the cow's ears, but over time, some of them can lose them.  Shane knows each cow just by looking at them.  I personally am not that great at identifying them.  We could be out in the pasture and come up on one with their backside facing us and he could tell me exactly what number they were.  And sure enough, their ear tag number would be exactly as he called it.


Now that we've been keeping replacements from our own herd, some of the heifers look just like their dams.  I mean sooo much like them that it can be confusing.  Shane decided on the branding because it is permanent and we will be able to identify them much easier.  He went with the electric brander from L & H Branding Irons.   Of course we do not have power way out in the back forty, so a generator had to be pulled out there. 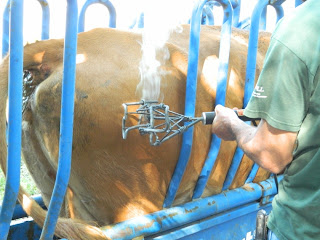 It only took a few seconds for the electric brander to work.  It produced some smoke and the smell wasn't so great, but the brand came out perfect.  Now we won't be having any cows losing their identity! 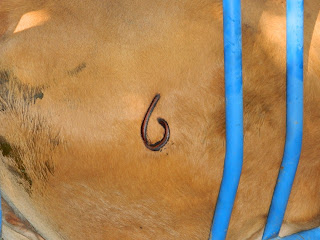 Can you spot the "predator" in the photo below?

When I was taking photos of the pups the other day, our cat decided she wanted to be where I was.  Only problem is, our LGDs do not like any other animal in their pasture unless it looks like a goat, horse, or cow.  When she got to the hot wire separating the pasture, she was met with some very serious pups.  She decided to hunker down in the weeds hoping they wouldn't notice her. They just barked and dared her to cross that line.  All the while, I'm wondering if she was going to be crazy enough to try......And how in the world am I going to intervene.  All was well though.  She stayed on her side and didn't cause any trouble.   Thank goodness.  I don't think my body could move that fast!
Posted by Ashley at Wednesday, October 17, 2012 No comments:

We have 4 Anatolian Shepherd pups for sale. They have been raised with cattle, horses, and goats.  I managed to get out and get individual photos of them this morning.  That was a job!  Moving creatures are hard to photograph for me.  I really need to get some photography lessons under my belt.  Oh, and despite what Mr. Nic says, I need to get Photoshop too ;)


They are $400 each without registration. There is an extra fee of $20 due if the pup is to be registered.  If you are interested, let us know.
Posted by Ashley at Friday, October 12, 2012 7 comments:

Legislators at the Farm Bureau Meeting

Last Thursday we had our monthly Perry County Farm Bureau meeting. This was my first meeting, and boy was it a good one. We were fortunate enough to have some of our legislators attend the meeting. It was  very informative.  They talked with us about what is going on in the legislature that pertains to agriculture, while offering to answer any questions that we may have had for them.

Where's the beef?   Well, it is now in our freezer! 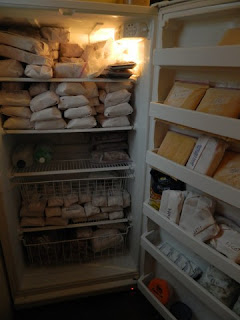 We had one of our steers processed and it was ready for pick up today.  He was a little over 600lbs and dressed out at 70% which ended up being 410 lbs of meat.  That's a lot of beef!  I was afraid we wouldn't have enough room for it all.  I managed to squeeze most of it in with a shelf to spare! Shane took an ice chest full to his mom to stock up her freezer.  She had already cooked some of the ground beef tonight and called to let us know how good it was.
Posted by Ashley at Monday, October 01, 2012 No comments: