Shane was out in the pasture the other day putting up a strand of hotwire along the top of the fence in one of our pastures.  He's hoping this will keep any bucks from being interested in jumping out.


He text me some pictures of  something that he just so happened to see hidden in the grass. 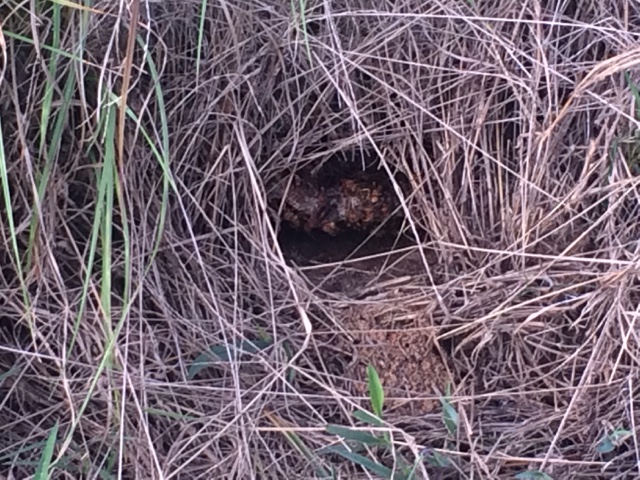 Luckily he didn't stir them up or I'm sure he'd have felt like he'd gotten zapped by the hotwire!  The nest looks loaded.  I've never seen any like this so close to the ground.  Be careful while you're out and about.  These guys can be hidden anywhere! 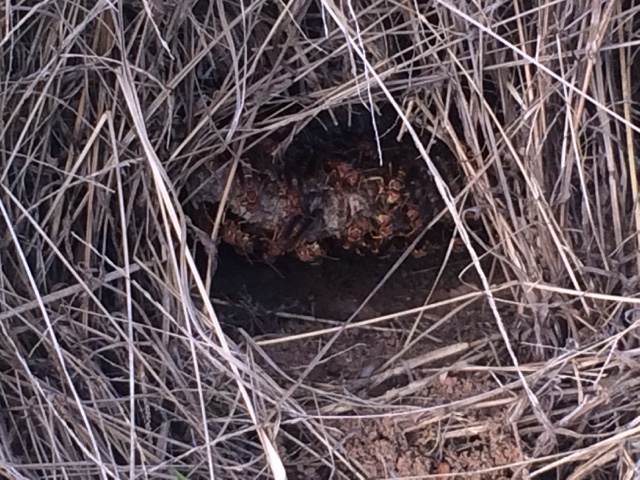 If you don't want to see a lot of photos, just skip this post.  Since I haven't blogged hardly at all, I thought I'd include some snapshots of our summer.  The farm was chugging right along, however, I didn't take many photos.  Of course I took many photos of our kiddos.  So here are just a few snapshots of what we've done over the summer :)


Of course, we did so much more.....but I didn't have photos of everything.  I really do enjoy blogging.  It just takes so much time to sit down and iron out a post.  Family time, homeschooling the kids, chores, and extracurricular activities  just takes priority over the blog.  Maybe I'll be able to balance it all out soon :) Hope y'all have a great weekend!

This past weekend we moved the does across the road to get them checked one last time before breeding.  We hadn't done FAMACHA checks since June.   We've  had a very dry summer.....hardly any rain at all.  It was a pretty easy check-up for them.  It went rather quickly.  They all did remarkably well! Now if only keeping the bucks from getting any more stirred up, while moving the does  near them, would've been nice!  We've had  Duke and  Rooster contained in part of our catch pen for a few weeks.  Duke has seemed  to have such a high  testosterone level this year!  He's been quite a pain in our backside due to his eagerness to get with the ladies!  He has managed to find a way out of several fields.  The catch pen managed to do the trick with containing him. Rooster was put in there with hopes of keeping him company.  I am thankful that Duke isn't one of the bucks that continuously beats the gates with his head.....Pistol Pete put some work on several gates/pens with his head. 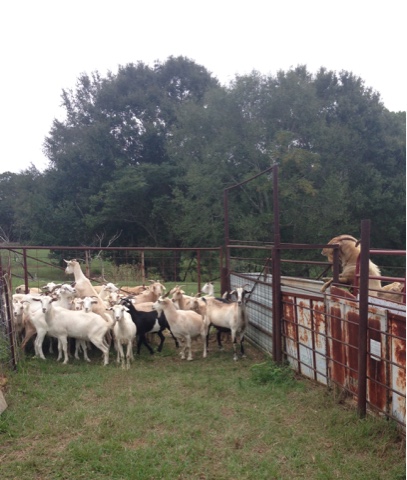 When we brought the ladies into the catch pen, we worked them down the chute where Duke is standing in the photo.  He tried his best to figure out how to get in with them.  It was a sight to be seen. Yet another sight to be seen was after the decision was made to let him out in the pasture while we were continuing to check the does. He went around to an area of fence that is sagging and loose.  He put his two front legs on it and over he went.  Problem was that now he was in the holding area with the few does that we'd already checked.  These particular does were going to be put with Copper this year, not Duke.  Needless to say, I ran and ran chasing him....He was so close to breeding one!  Shane finally stepped in and caught him, thank goodness!  All I could see was that he was going to have his way with several before he got caught.  He's the fastest goat ever! He didn't wait one second!  I couldn't even get close enough to grab him with the crook.  Also,  I won't confirm or deny that it may have been myself that had the idea to put him in that pasture :)  Also, no pictures were captured during our pursuit of catching that stinky thing!
We have an up-and-coming buck named Copper that we are excited to use this year.  His mother is T26,  the doe I wrote about a few months back in this post here. He is actually one of the bucklings in the second picture on that post.   We hope that he will pass the traits of his mother right on down to his daughters. 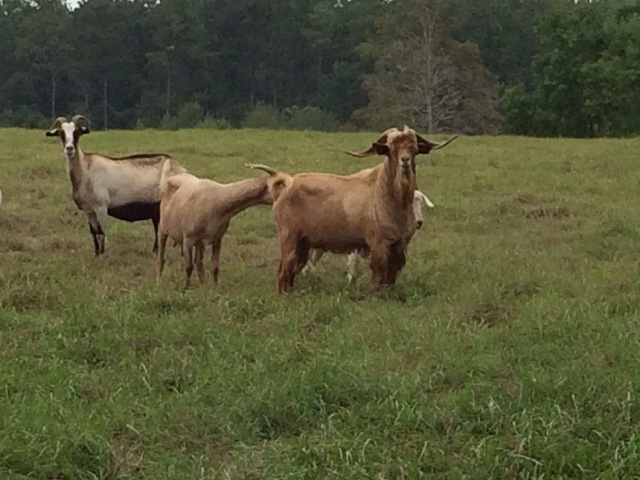 He will be breeding a majority of our doe herd this year.  I think several of them were quite happy to see him :) 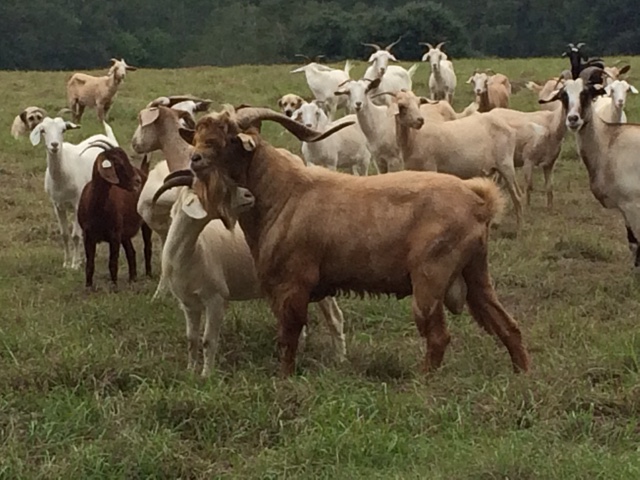 The buck pictured below is out of a T26 daughter and DSK Duke.  We're keeping our eyes on him through the rest of this year and the  next.  We're hoping that he will be able to join our breeding program.  He's doing well so far.  He's actually quite vocal towards the does and seems to be unhappy that he can't join in on the fun this years breeding season. 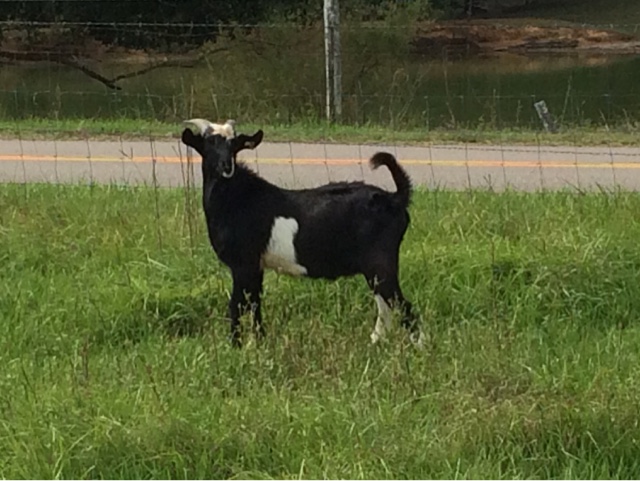 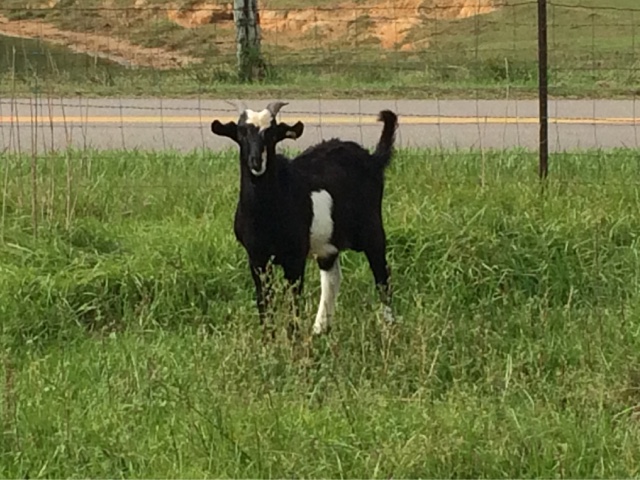 Sorry all of the photos are grainy and not that great of quality.  They were taken with our cell phones.  It's just not practical sometimes to have the bigger camera around my neck while working the animals.
Posted by Ashley at Friday, October 09, 2015 No comments: