The past couple of weeks have been packed with all sorts of fun.  We had bible school the second week of July, then we made a week-long visit to Ohio to visit some of Shane's family the following week.  I am now starting to get back into the routine of things around here.  This blog is one of those things.  A post is long overdue, so I thought I'd share what we did 2nd week in July; while I'm working on another post about our trip.
The week of bible school, Ms. Beverly's (my mother-in-law)  Merit sweet corn was ready to be picked.  I took the kids over one morning and we got to work.  As you can see below, the kids really helped out a lot.  We shucked the corn, cleaned the silks off with a small brush, and cut the corn off of the cob outside.  It can be a really messy job, so outside was the perfect place.

We would only shuck and clean 100 ears at a time so we wouldn't get too far ahead of ourselves.  We had a little routine going and it worked out pretty good.
Ms. Beverly would take the cleaned cobs and cut the corn off with a wooden corn cutter.  This little tool made the job so much easier than the way I remember my mom doing it.  My mom would use a sharp knife to cut off the corn, and then she would scrape the cob with the same knife to get all of the juices out.  With the corn cutter, you just run the cob down the blade, and then scrape the juices out right below the blade.  I tried to get a picture of the cutter in use, but the working parts were covered in corn.  I have included a link for those interested in seeing one here.  The only problem I could seem myself having with the corn cutter, is getting my finger cut.  I am a little accident prone, so it would be very likely.  Ms. Beverly handled that job very well with much skill. 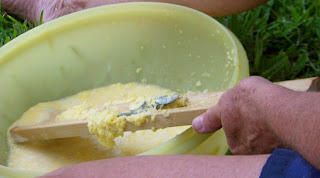 After the corn was cut and juices scraped, we then took it inside to put in the microwave for 5 minutes per 2 qt bowl to blanch it.  Then we transferred it to another bowl to cool down before putting it into quart freezer bags.
After put in the bags, the bags were wiped for any juices that might have gotten on the outside.  The juices would cause the bags to stick together like glue when stacked in the freezer.  They juices are very starchy and sticky.
It is so nice to have creamed corn  in the freezer to pull out during the winter months to be cooked along with other vegetables put up from the summer garden.  I put the corn in  a microwaveable CorningWare dish, add a little milk, butter, and dash of salt and cook it.  It's very simple, and we have to fight Shane to get any of it.  Merit sweet creamed corn is one of his favorites.
Posted by Ashley at Wednesday, July 27, 2011 1 comment:

Finally our internet issues have been resolved and we are back up and running thanks to some great help from Debbie at Wildblue!  It's so nice to be able to call customer service and someone actually be able to help you.  Making a post on the blog is on my things to do list for today, so I'm working on checking it off.
We've been pretty busy around here lately, so I'll share some of the things we've been getting into.
Last weekend, Shane and I took one of our lease buck to a farm in Laurel, MS.  This buck is out of Rooster and just turned 1 year old.  He has already been leased to a farm in Lucedale, MS so we should be able to see some of his kids in a few months.
Mr. Clark, in Laurel had all of his does caught up in a pen when we arrived, so all of the ladies had a chance to meet the buck pretty quick when he was put in the pen.  It is so funny to watch how the does react to a buck.  They come up and rub themselves up against him and all over his neck.  Of course, he seemed to enjoy all of the attention.

He made his rounds checking everyone out.  Mr. Clark's doe herd consisted of Boer crosses, Spanish, and Nubian.  He said that he had herd about Kikos and wanted to see what the Kiko will do for his herd.
﻿
﻿

I had to share this....when we first arrived Mr. Clark told us to beware of his little Dachshund.  He said if he didn't like you, he would let you know and would never forget it either.  He then said that this little dog had the heart of a big ole "goat dog".  When we unloaded the buck, this little dog stood at the gate and took his job very seriously at keeping the goats in the pen.  He stood guard waiting for one to get out of line only to chase them right back to their spot.  Those does respected that sweet little thing, only they didn't view him as a sweet little dog.  They feared him and I think I saw his chest puff up with pride when he was on guard.  It was too funny.  Doesn't he look like the biggest baddest goat herder ever?

We've also sold most of our Anatolian Shepherd pups.  We now only have 2 females left.  They have been moved with our main doe herd and are at work by themselves now.  They are doing super...I mean they haven't been one bit concerned about being with Jael (their dam) in the other pasture one bit.

We started bible school at our church last night that will go on through this week.  I am teaching the 8-10 year old kids and it is such a blessing!  The kids are super excited about all of the things we have planned this week.  Hopefully I'll be able to share more photos of VBS later in the week.  The photo below is one corner in my classroom.   The theme this year is "Son Surf Beach Bash".  I'm looking forward to a great week!
Hope you have a great week too!  Now I gotta get back to that "things to do list " :)
﻿
﻿
Posted by Ashley at Monday, July 11, 2011 1 comment: