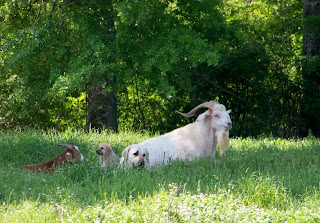 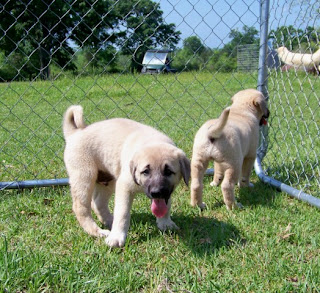 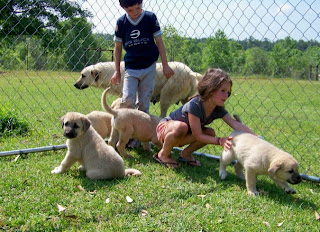 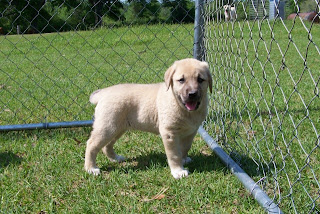 Shane moved the horses to this pasture that our bucks are in with the pups.  He went out there Sunday to find that Mallory's horse, Sally, had taken a bite at some of the pups.  Two of them were missing some of their fur in a small area, so Sally had to be removed.  I also had an incident with Sally the other day where she wanted to take a new calf from it's moma.  It was a really crazy event.  The horses, in my opinion, don't mingle real well with other animals.  Some of our horses are real laid back, but others aren't.  We're relatively new to the whole horse thing, so it may be normal for them to act up when put with other animals.  It is really hard though to keep all of the animals separated.  For now, that's how it's going to have to be I guess.
Posted by Ashley at Tuesday, April 19, 2011 1 comment:

A little while back I had written about moving our cows and goats through 5 acre paddocks to graze the ball clover down.  You can read about it here.  They were moved from that this particular area about 2 weeks ago.  It had been eaten down pretty low.  In those 2 weeks of "resting" the goat and cattle herds had to be moved back through here because of the growth.  It's amazing how quickly the forage in these areas have recovered and are able to be "re-grazed."  Some may say that it's too soon to put the animals back on it due to parasites, but it is quite high enough that parasites aren't a concern for us.  It's when you have the shorter forage, and the animals are eating practically within a couple of inches off of the ground.
In these pictures you can see that the clover is starting to bloom.  It smells absolutely wonderful  here with all of those blooms.  I told Shane that we could make some bees very happy around here. 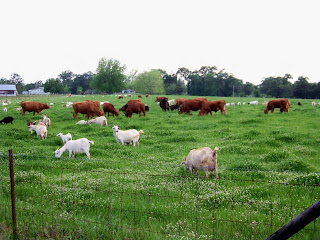 No horse? No problem.

My mother-in-law told me about seeing this on the news the other day.   I couldn't believe it, so I had to share it with you.

I was watching the news this morning with my cup of coffee and noticed a commercial on about Mississippi Farm Families.  I decided to check out the website that was advertised.  It was stated on their site that "Farm Families of Mississippi is dedicated to the education of the general public about the importance of agriculture to every Mississippian."  Here is a link to their site:  Farm Families of Mississippi ; just click on this and it should take you to their site.  They have some interesting information about Mississippi agriculture on this site.  Check it out!  Anything that helps educate the importance of agriculture should be shared.
Posted by Ashley at Friday, April 08, 2011 No comments:

The pictures speak for themselves...

Where do I even begin with this post?  It all started when Shane came home with a load of clover mowers (cows) just purchased from a fellow in Greene County.  He unloaded them in a small area to be introduced to the clover.   Well these gals had another thing in mind.  They were very skittish.  Our horses happened to be in the area that they would be grazing, and they weren't very sure about the horses.  They wouldn't funnel through that area as Shane had hoped.
A couple decided that they would take this route. 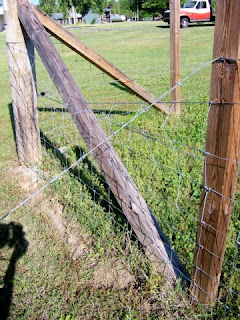 Yep, they jumped the fence and broke the barbed wire strand that was on top of the net fence.  Little did I know that me having my camera would lead us to capture an event like we did.   While I'm photographing the evidence, Shane takes off on the Kawasaki mule to get our border collies to round up those two crazy cows.  ( By the way, I called them crazy.......Shane said "Oh they're just a little skittish of the new surroundings.....) 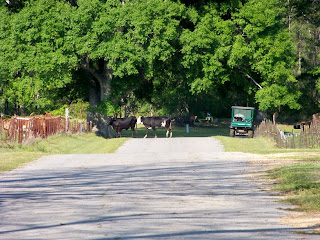 So there Shane went, down the road with border collie Davie in tow.  He was going to try to push them back towards me to get them back with the rest of the "new" cows.  I was to stand where I was at to keep them from getting past me.  I took this opportunity to snap shots of all of the calamity going on down the road. 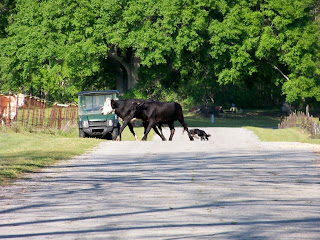 Things were finally looking up.  Those two girls spotted our cattle herd on the other side of the fence, so they decided to get out of the road and walk the fence line while Shane and Davie pushed them.

Then they appeared to be heading in the right direction.....back where they came from.  It was going so well........ 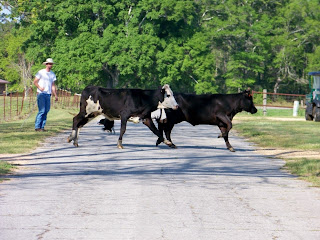 Then in an instant, Crazy Cow #1 decided she wanted back across the road with our cows, so she jumped the fence. 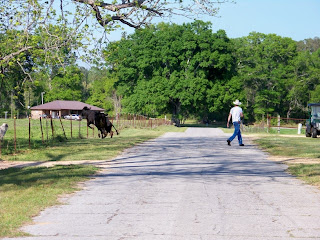 So there they  go again back down the road with Crazy Cow #2.  Davie looks like she's not sure about the whole situation in this picture.  I think she's trying to tell Shane that he can have this job. 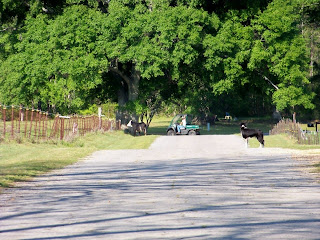 Things were going better.  She was as cool as a cucumber, or so I thought.  Before she had gotten too close to me, I opened the gate that lead to the pasture with our cows in it.  Shane decided he would just put her in there instead of stressing her out any more.  He would just push her down to where the opening was, and she would hopefully just walk right on in.  Well guess what? 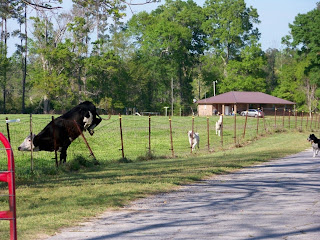 Yep, she jumped too!  Can I get a yee haw?
If you look closely to the bottom left corner of the picture, you'll see the red gate that I had opened toward me.  If she had only went a little farther.  Oh well, we had some excitement for the day.

By the way.......I still think we've acquired some crazy cows; and Shane still believes that they're a little skittish.  I guess the verdict is still out on this one.
Posted by Ashley at Saturday, April 02, 2011 No comments: 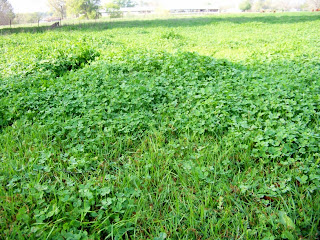 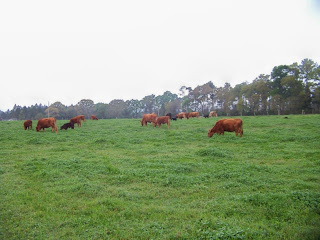 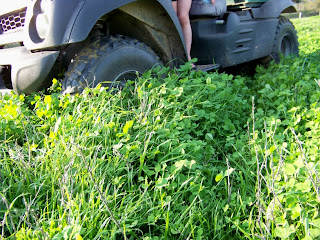 By the time we move those cows through the other two spots , the first 5 acres will more than likely be ready to graze again.  We have had a pretty good bit of rain here lately.  The only problem we have is there are another 25 acres of ball clover.  Shane is going to look at some cows today to buy and put to work on mowing it down.  If not, he will have to bush hog.  We sold our hay equipment, so it wouldn't be possible to bale it.
If you would like more information, just check out their website.  I'm sure they would be willing to answer any questions that you may have too.  They have been real helpful to my husband in answering any questions.  Here is a link to their website:  http://www.ballclover.com/.
Posted by Ashley at Friday, April 01, 2011 No comments: