Thankful and So Blessed!

Today our kids had to go to school to make up days that were missed during Hurricane Isaac.  So for the next few days, I'm going to try to get all of the house matters in order.  That way, when they are out Wednesday-Sunday, we can enjoy time with each other.  That's what I love about this time of year.....reflecting on how blessed we are.    Our pastor mentioned yesterday in his sermon that rather than wanting more things, we should be thankful for what we have and not take some of the simplest things for granted.  So true.  We have salvation, love, food, water, shelter, health,   What more do we need?  Absolutely nothing.

Hope you all have a great week! 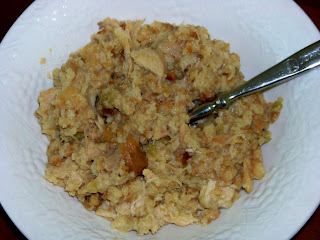 Ever since I have used this recipe, it is the most requested dressing...... It stays so moist!
Posted by Ashley at Wednesday, November 14, 2012 No comments:

I'm really glad Shane decided to go with branding the cows. I can see the numbers much better than I could ever read a tag from afar. This is what they look like 2 weeks later. 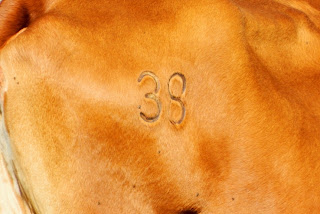 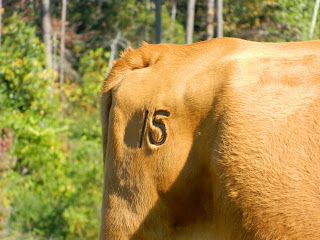 I think they turned out real well.  If you want to read about the branding you can click here for that post.
Posted by Ashley at Monday, November 12, 2012 1 comment:

The Best of Friends

Last night, someone called asking me about Anatolian shepherds. She said that she had never heard of them, but wanted to know more about them. While talking with her, I told her of the bond that the dogs form with the livestock they are with. It's absolutely amazing if you've never seen it. I told her of Sinbad. We purchased him when he was around 4-5 months old. We had the bucks separated from the doe herd, so he was put into the buck pen with them. Right away, he took to Rooster and Pistol Pete. On cold mornings, it was no surprise to see him sleeping cuddled up right beside Rooster.

Til this day, when Rooster is put in the same pasture with Sinbad they still have that bond. Sinbad will get right next to Rooster and stand there leaned against him.  Of course, Rooster doesn't have the same feelings toward Sinbad. He doesn't seem to like a lot of anyone in his personal space for too long, unless it is a doe.  He will take all of that friendliness towards him to a point and he will finally just get up and walk off.  Then Sinbad will go on about his business, patrolling the pastures.  These dogs are amazing!
Posted by Ashley at Saturday, November 10, 2012 No comments: