I have been slacking on posting on the blog lately, so please accept my apologies.  Things have kind of slowed down around here, and quite honestly.....I'm enjoying it!
Here's what we did this weekend.  In preparation for this winter, Shane has come up with a portable hut to put in the pasture for our does.  We learned a hard lesson last winter, when it was freezing with rain mixed with sleet.  We have our does in a different pasture that has absolutely nothing to get under, beside, around, etc. to get away from freezing rain.
It started out with these metal rings that were like a spool for some kind of cable.    There are two of these rings with a rod in the center for the cable to roll around like a spool of thread. 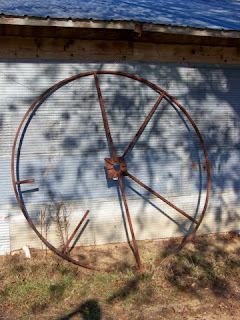 Then they were cut in half to make semi-circles to become the frame. 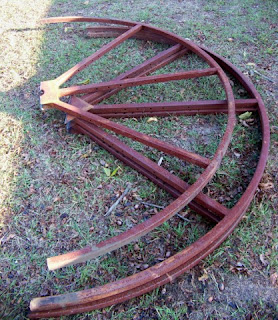 Below is some tin that we have had put to the side waiting to get some good use out of it.  Let me tell you a little story behind this tin.....When Hurricane Katrina came in down here in 2005, she blew this tin off of Shane's mothers roof.  We kept the pieces that could be reused for something else.....and what do you know???  We have found something good from the devastation that the Hurricane caused us.  We were able to use the tin.....5 years later. 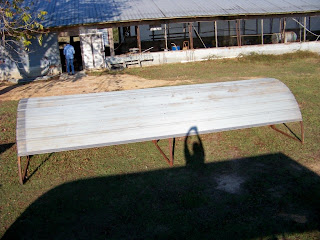 This is what it looks like underneath it.  There are 3 sheets of tin screwed across the semicircles.  They are ran lengthwise with 3 semicircles underneath which is overall 20 feet in length.

In order to transport it to the field, we had to use our utility trailer and move it very carefully.  As you can see, it was too big to put in the trailer, so we had to balance it on top and use clamps to hold it in place. 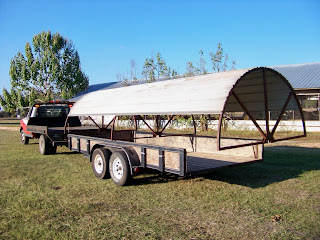 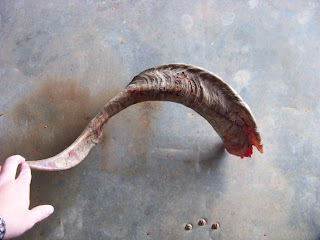 Can you guess what this is a picture of?  If you guessed a goats horn, you are correct!  Now why am I holding this horn and snapping a photo of it?  Well, let me tell you why....
Yesterday, we ended our breeding season and moved the does together into one herd again.  That meant that our bucks went back into the buck field together again.  Of course one would expect the usual pecking order fighting to go on, but Rooster and Gold Digger took it to another extreme.  They started ramming their horns, and before we knew it, this is what happened..... 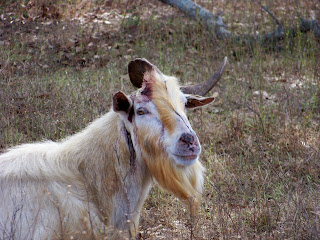 Gold Digger lost one of his horns.  It was broken completely off at the base of the skull.  You can see down into his skull by way of two holes left in his head from the horn.  It actually scared me...I thought we were going to lose him from bleeding to death, but it didn't bleed as much as I thought it would.  We gave him an injection of Nuflor and put some paste around the holes (not in them) to keep flies away per the vets instructions.  He said the holes needed to be left open to allow drainage.  I thought WHAT???  to myself....leave holes that expose the inside of his skull open??????  Shane and I were talking last night about what if an acorn fell out of the oak tree and landed in one of those holes.  It would hit his brain...How crazy is that!  He is doing well today, just hanging around in a pen by himself.  I tell you though, it is never a dull moment around here!
Today Mr. Clause Miller came to pick up his 7 does that were brought a couple of months ago to be bred by Pistol Pete/Rooster.  They left out this afternoon heading back to Illinois. 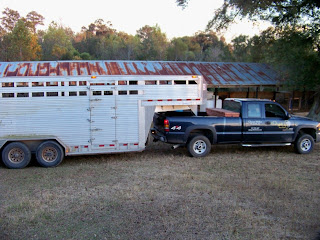 Three of these does were in with Pistol Pete, and the other four were with Rooster. 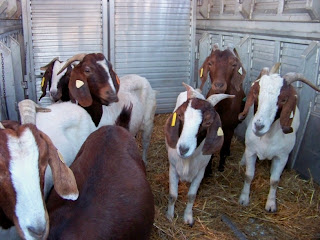 Also, Mr. Miller was kind enough to transport one of our anatolian shepherds back with him for the Greniger's from Just Kidding Goat Farm in Minnesota.  They will be driving to Illinois to pick up their new LGD, Xena.
So that's all that's been happening around here.......for now, that is.......because it there truly is never a dull moment when it comes to our place!
Posted by Ashley at Wednesday, November 10, 2010 No comments: