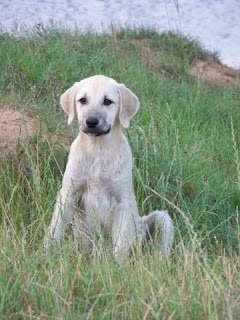 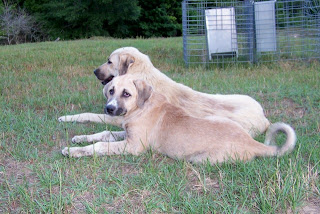 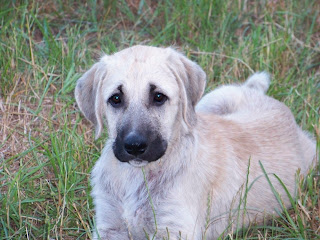 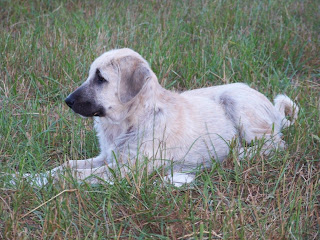 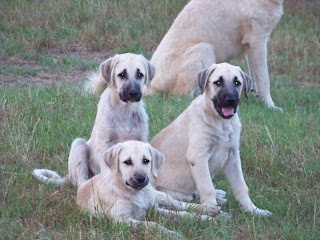 These pups are out of Jael and Kimba They were born 2-19-11. They have received 2 rounds of immunizations and have been dewormed. We have been letting them learn the ropes from their parents out in the pasture. They have been exposed to cattle, horses, and of course goats. As of now we have 2 females and 2 males left for sale. They are $400 each.  If you would like to see photographs of their parents click here.
Posted by Ashley at Thursday, May 26, 2011 2 comments:

If any of you out there have tried to take a photo of an animal, you know how hard it is to get them to stand still to get a decent shot.  I even got a camera with a longer range zoom in hopes of being able to capture a good photo without getting too close causing the animals to walk away.  The other day I was trying to get photos of a horse we have for sale and I noticed Rooster watching me from a distance.  I got my camera and zoomed in a snapped a few shots.  He stood there for a minute or so watching me, so I managed to get a half decent photo.  I am most certainly not a professional, but I am so proud when a photograph turns out without a blurred moving animal or without their head turned away.  So here he is.......
I have also uploaded this photo on our herd page on our website.  There you will find photos of our other herdsires.  We also have their pedigrees available to view on this page as well.
Posted by Ashley at Thursday, May 26, 2011 No comments:

We are in desperate need of a good rain.  Forecasts are calling for a small chance tomorrow.   In the past couple of months we may have received rain on 2 occasions; of course others around the country are wanting the rain to stop.  I wish there was a way to shift all of that water around to areas that need it so those that are getting too much wouldn't be dealing with the flooding conditions.
The forage in our pastures are just shriveling up.  It's also very dusty here.  At least we still have water in the pond.   Below I have included some photos from around the place. 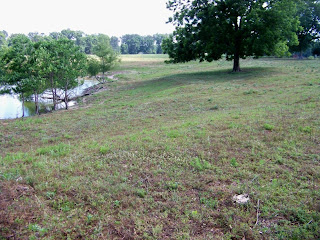 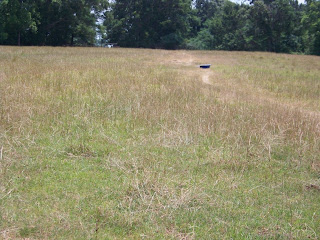 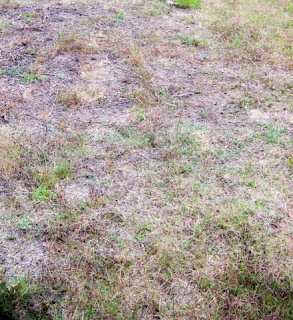 This picture below is where a stream usually runs through our back forty.  This is one of the places that the livestock would go to get a drink of water.  As you can see, it is mostly mud....not really any running water.  We have had to put the goats in the front pasture because we have a watering trough as well as a pond in it.  They have been unable to find the water in the back forty.  There is one stream left, and no matter how many times we have "driven them" (with border collies) to it,  they have yet to get any water from it.  There is some brush surrounding it and the goats seem to think there is a monster hiding behind that brush.  If they only knew there was good cold water!  We really need them to stay in the back forty because of what brush is back there.  The pastures hardly have any grasses left in them. 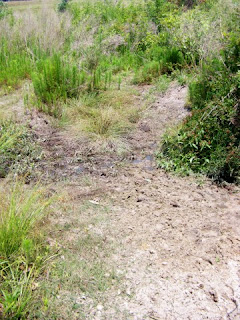 And finally, when I can bear to write about our experience with the commercial does we bought last spring......I will share it with you.  We were planning on providing  percentage kikos for those who may want to breed up.   Right now I can say that we've had a change of plans,  thanks to does like this one below.......those darned ole red-heads. 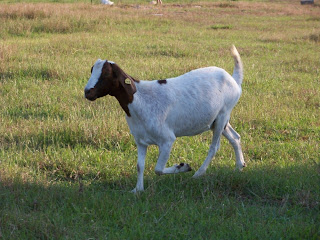 Will he be staying?

We have this horse, named Shaggy, that Shane has just put up for sale. He is a little "spirited" I guess you would call it. Shane has been riding him for a few months now, and he has a really great gait, ( he's a cross between a Quarter Horse and Tennessee Walking Horse) but he always seems so jumpy to me. I told Shane that I would rather him go somewhere else, so someone with experience could train him and ride him.
The funny thing is, he is an absolute gentle and meek horse when he's in the pasture. He will come up to me for a rub on the neck. Then he will proceed to follow me around like a little puppy. As long as I will pet him, he just stands right there with me.  Dillon also loves him for that reason. He says that Shaggy is the best horse ever and that he wants to keep him.

After he was listed for sale, Shane decided to ride him one last time. He came back and said that he rode perfectly. It was almost like he knew that he was going to have to leave us. Then Mallory wanted to ride him, and I was super nervous. He walked around our yard so calmly with her on his back. Then Dillon tried him out, and he did just as well with him.
Sunday we decided to go for a trail ride and Dillon rode Shaggy all by himself. Just as soon as we left with the horses, Shaggy fell in line behind me with his head down, and walking so calmly. I was amazed that this was the same horse that always seemed so jittery. It's almost like he knows when the kids are on him to be extra careful. I just wonder if it's too good to be true. Will he stay or will he go? I guess only time will tell. This will be the second time he has been up for sale. The first time Shane changed his mind, after being for sale only one day. So far, it's been a week and we've only had one call. It may be meant for us to keep him.....Any of you horse experts out there ever heard of a horse behaving differently with children?
While I was out in the field trying to get photos of Shaggy, Mr. Sonny, wouldn't leave me be.  I tried to get far enough away from him to get a picture, but he wanted to be right beside me.  This was the best I could get of him.  He is so shiny and beautiful!
Posted by Ashley at Wednesday, May 04, 2011 No comments:

There is a probe on the end of this remote, that when in contact with the electric fence, will tell you the voltage pulsing through the wire.  It has a screen that will tell you what the current voltage is, and  the direction of the current flow.  It also has an on and off button that will allow you to turn off the whole system from right where you are without having to go back to the energizer and flipping the on/off switch. (This comes in really handy when you are in the back forty quite a way from the main switch.) Some of these functions will work with any energizers, but the on/off capability with the remote will only work with one particular brand ( Stafix).

In this picture below you can see the probe at the top of the remote.  This is where you find the voltage.  There is a slot below that probe that you can put the wire in ( it has to have contact with the metal ) and it will find any problems that you may have on the fence.  It will point an arrow to the direction of the problem.  You will just keep on putting the remote on the wire and follow the arrow.  If it is pointing in the other direction, the problem will be somewhere between that point and the last spot checked prior. ( I really hope this makes sense :)


Shane has spent quite some time using this remote to locate any problems with the fence.  Just the other day, it showed that the voltage was low, and pointed him in the direction of the problem.  He said that he followed the arrows and he finally got it narrowed down to an area.  He couldn't see any problem right away, but with closer inspection, he found that an old piece of wire was sticking up out of the ground and was touching the backside of the fence.  He was able to turn off the energizer ( which is a good idea when dealing with a wire that has 10,000 volts running through it)  from that location and fix the issue and turn the energizer right back on within a few minutes.  Then after testing the fence again, all was well.   He said that the remote was a lifesaver.  He also said that he highly recommends it to anyone that has a large area that has electric fencing.
Here is a picture of the remote from the manual.  It has all of the parts and functions of the remote.  It might help you understand it better. 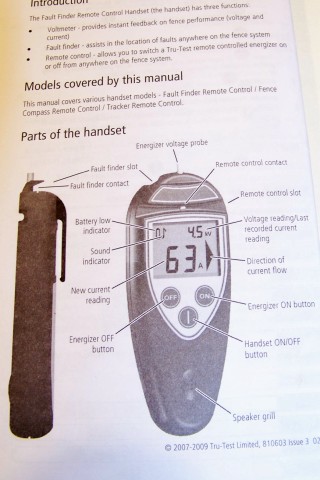