His Very Own Goat

Our boy is growing up so fast!  He had to have a cup of coffee one morning after coming along with me to move our electric fence.  I usually don't allow the kids to have coffee, but I decided it would be alright if he had a little coffee with his milk ;)  He had gotten up early with me on this particular day and wanted to help out with the chores before school.  He has just matured into such a responsible little man right before my eyes.

This past summer he earned kids kikobuck$ at the AKGA convention by participating in youth activities.  That got him fired up at the thought of purchasing his very own goat.  He has asked Shane a million times if he could buy a particular goat from him, so Shane finally told him "sure".  They've agreed on a payment booklet where Dillon will make payments towards the amount he owes.  He earns money by mowing the lawn or helping out with farm chores.    He is thrilled that he is going to be raising his "very own" goats.

The kids have always helped out and are involved with the goats, but there's just something about this goat being his and his only.  He was able to make the decision  to  pair up Pistol Pete with this doe.  He is so excited about the kids being born and making those management decisions about his herd.  What a great learning experience this is going to be for him!
Posted by Ashley at Saturday, January 11, 2014 2 comments:

Last year he started working on an area that joins our property that wasn't fenced in. He managed to get it cleaned up throughout  the year and fenced in; so far it has been goat-proof. This is what the  new fencing looks like.


The old fence that separated this land from our pasture was pretty much still intact except for one area that had been removed so Shane could drive in and out of it. It was an old 4 strand barbed wire fence.  Shane decided to get that fence up so the goats and cows would have easier access. 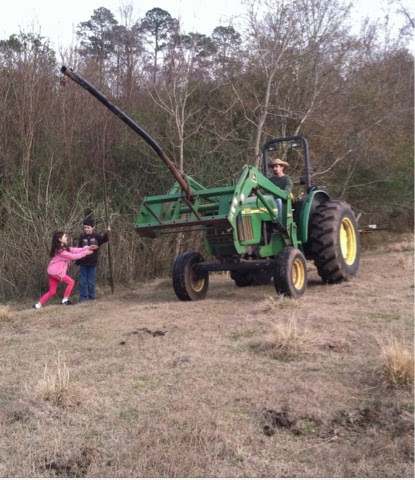 The two kiddos decided to help out with the job too. First Shane removed all of the barbed wire and rolled it up. Then he took the tractor and wrapped a chain around the t-post and lifted up with the front end of the tractor. It worked real well. Dillon had the job of wrapping the chain and then unwrapping when the t-post was pulled out.

He then handed the t-post to his little sis who took her job very seriously. She would run to the back of the tractor and place the t-posts on the back across the hay forks. 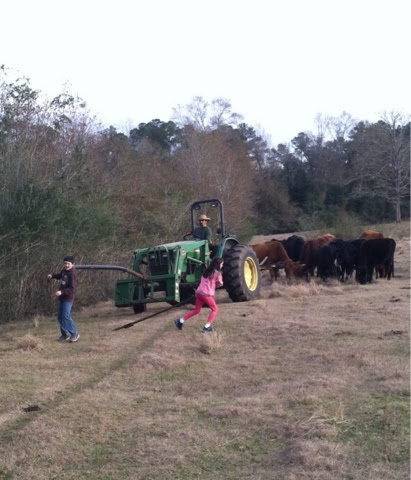 They had quite a little system going there. They were quite the team. There wasn't one thing I could do but watch. I remembered that I had my phone in my pocket and decided to snap some pictures with it.

I ended up walking down the the creek that runs through the newly fenced in area. I noticed all of the hedge bushes that are growing wildly, all had markings on them. I took a closer photo to show you what they look like. 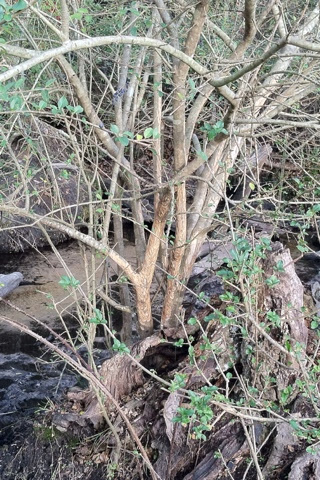 That is what goats can do for overgrown brush! They are like a land clearing crew. They will chew the bark off of the brush and will nibble on the limbs and peel the tree with their teeth. They go after it like it's candy.  It's amazing how much they have improved our land by getting rid of the brush and briars.  I only wish I had taken pictures when we first got the goats.  I never thought of doing that.

A Dog And His Goats 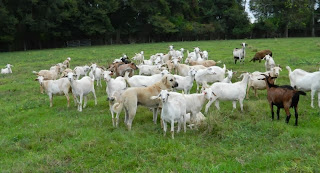 I just wondered if you can tell Sinbad really loves his goats?  Every time I go out to the pasture, he is right in the middle of them.  He will come greet me and I give him a good bit of loving, but he will turn around and walk right back to his goats and stay.  It's amazing the bond he has with them.  I really do believe the goats like him pretty good too :) What do you think?