The Farm is Expanding!

I may have mentioned a while back on the blog that we were able to purchase some property that joined our back pasture. Shane had been in the process of having the perimeter cleaned so we would be able to start working on fencing it in last summer. After his accident, all of that had to be put on hold. Once he recovered and had the go ahead from his doctor, that was one of the main things on Shane's to-do list. He wanted to get all of the new area fenced in. It was a project that would be done in partnership with the NRCS. We (Shane, myself, Dillon, Mallory, & and my mother-in-law Beverly ) would tackle this project nearly every weekend.

This is one of the areas on the property, before any fence work had been done, to give you an idea of how it's transforming.  This was a driveway that once led to an area that had had a mobile home set up.  That's all that was cleared away. 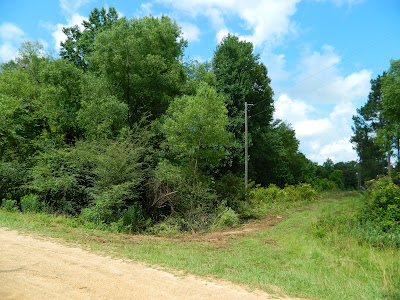 This is a photo that I snapped of Shane a couple of weekends ago bush hogging this area. He had the larger "bat wing" working on this particular day and then he had to use the smaller bush hog because the larger had broken down and had to be repaired. 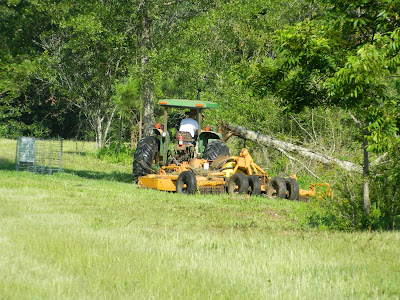 This is the same area that was shown in the first picture.  The whole area is now surrounded by netwire.  There are goats in this particular pasture at the present time, but they're always out deep in the brush unable to be photographed.  They've been working on this area, but we'd had a lot of rain and it just has been growing like crazy.  It bothers Shane when he's got a vision and it hasn't come to fruition yet.  He is steadily working himself from day to almost dark on this area any free chance he gets in hopes that it will be a nice clean pasture one day.  I'm most certain he will have that accomplished sooner than you can imagine. 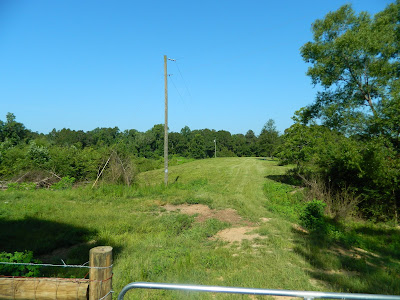 I will try to find more old photos of the land and show you a better comparison.  This just is one area.  In my opinion, it's amazing the transformation that has taken place!
Posted by Ashley at Tuesday, July 28, 2015