We have these trees, that we call Chinaberry trees, on various areas of our farm. Shane's grandfather believed that these trees had some benefit to his cattle. He said that when a cow got "wormy" that they could eat from the Chinaberry tree and that it would "de-worm" them. He never used any kind of de-wormer for his cattle because of having these trees in the pastures with them. The photo below is one of the trees growing beside the pond.  We actually have quite a few growing near the waters edge in both of our ponds.  The one in this photo has seen better days. 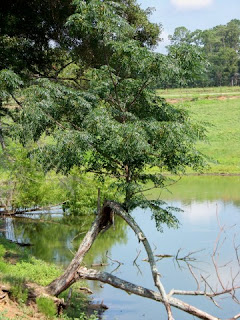 I have seen the cows nibble at the leaves from time to time on these trees, but I have often wondered if there is anything to it. Our goats absolutely love them.  I decided I would try to educate myself on the tree and I found this article about the tree.  It's pretty interesting.  It did say that there is a component of this tree that is used in insecticides; don't know if that would cause it to have an anthelmintic property for animals.  This would be something that I would like to find out.  I did read that the Chinaberry tree is considered poisonous to swine in this article by UC Davis-Weed Research and Information Center.

We have a few of the trees that are growing in a leaning position which enables the goats to walk right up the tree and eat the leaves/berries.  Since they couldn't climb the tree in the photo below, they started with the bark.  The only problem is that when you let the goats eat the trees like this, they will eventually kill them.  Goats are good at ridding your place of invasive plants/trees if you'll allow them.  I read an article in the Goat Rancher a while back that if you wanted to keep goats from eating the bark and killing your trees to collect goat pellets in a bucket and let them soak in water.  Then you can "paint" the trees with it.  I think this idea was featured in the "Makin' Do" section of the magazine.  It's title was something like "Makin' do with goat poo".  I haven't tried it, but I can see how it would work. 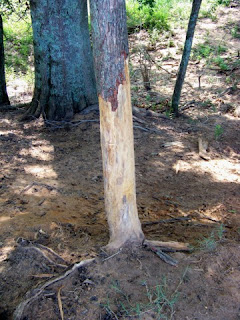 We do like to keep a variety of plant species for the animals, so we try to move the goats to a different pasture when it looks like they are going to kill off some specifics plants.  We are the only people around this area that actually don't mind having "weeds" in our pasture.  I've heard Shane tell several other farmers that visit our place, " Oh no, that's not weeds, that's goat food."
Posted by Ashley at Thursday, September 15, 2011