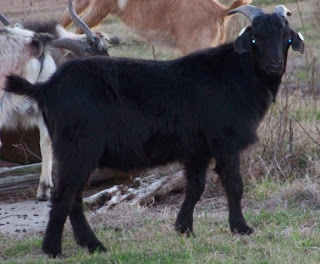 This buck was leased out to a local commercial producer. When the man brought him home, he said that he was the most aggressive breeder he had ever seen. That was his first time to be with the ladies, and he came home with a strut in his step! He walks around now like he is a new man!! He is one of the bucks that was in the Oklahoma Buck Test. He is doing really well.... Even more so now than ever!
Posted by Ashley at Tuesday, February 02, 2010