Update from the field #2

As of today,  58 kids have been born.  It is a sight to see all of those little kids running around and jumping all over the place. 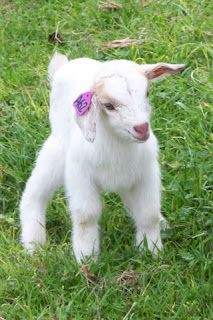 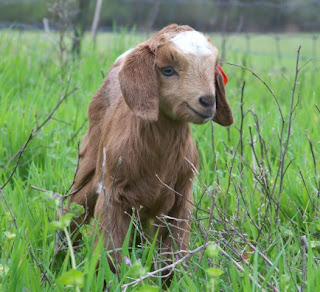 Yesterday we had 2 sets of triplets born.  I can't even tell you how I was feeling when I saw a doe standing there with 3 kids.  It's not something that we get too excited about.  The funny thing is, one of the does was a first timer last year and had triplets then.  They all died in that awful storm we had, they were washed away in the stream.  So she decided to repeat the triplet thing again.  I tell you they have the most beautiful color.  Yes, I know that color has nothing to do with production......but I do like to see all of the different colors and markings.
We will  have to keep an eye on the does and her kids to see if we will need to pull one off of them.  As for now, they are doing okay with the triplets.
I caught this 2 day old kid already starting to nibble.  He was checking out everything about that stem with his little lips. 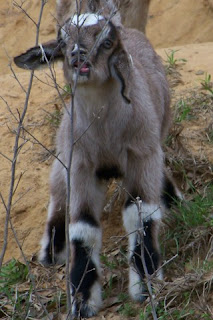 Jael and her puppies are doing well.  We ended up having to move them out of the pasture where the does are kidding.  We put her in our cattle trailer in  a small lot behind the barn.
Shane found a first time doe wandering about and one newborn kid unattended near where Jael was with her pups.  He had a gut feeling to look in where Jael was, and she had taken a kid under there with her pups.  The kid was dead.  He put 2+2 together and took the other kid to that doe.  She had bloody ears and face.  We figure Jael had decided to fight for those kids.  She did the same thing last year during kidding ( she was about to have pups).  We figured since she already had her pups, it wouldn't be an issue.  Wrong.  I think she is so maternal, that it is she thinks it is her duty to try to take care of all of the little ones whether they are canine or not.  After looking closer, another doe that had kids the same night had a beat up looking head and face.  She must not have backed down.....she still had both of her kids.  The new mom must have been shocked.......  Although, she is now taking good care of her little one.  We will not be able to have Jael with pups (or expecting) near goats that are going to be kidding.

The pups are little butterballs.  There are 3 males and 3 females.  It is so hard to resist picking up one of them and snuggling up to their puppy breath.  Here are the latest pictures. 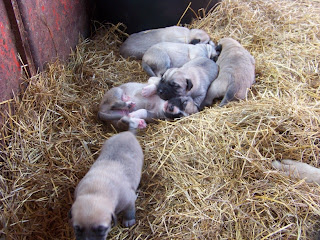 I tried to publish this on Friday night, but the heavy rain was causing our internet connection some trouble.
Posted by Ashley at Saturday, March 05, 2011