50's and Pumpkins and Birthdays, Oh My!

There have been so many things happening here and there that I feel like I have been  a rubber ball bouncing from one thing to the next!


The kindergarten classes at the school celebrated being in school for fifty days by having a "50's" day. All kids were encouraged to dress up 50's style. A friend of mine had a costume from when her daughter celebrated 50's day a couple of years earlier. We borrowed it and it worked perfectly! I did put one of Mal's uniform shirts underneath the top because it was a little large and was falling off of her shoulders a little, but that shirt did the trick.

The kindergarten class also made a trip to Mitchell Farm's in Collins, MS to visit the pumpkin patch.  The night before the trip, the temps dropped down to the 40's.  It was such a drastic change from the mid 80's during the day that we had been used to.  We all had chattering teeth the whole tour.  It was kinda miserable to some folks. I personally prefer the cooler weather.  You can put many layers on to stay warm when it's cool, BUT in the hot weather you can only peel so many layers off before you might possibly get arrested for........well......you know what I'm saying ;)


Mitchell Farm's also had many, many fields planted in beautiful sunflowers.  We tried to get the class together for a little snapshot in front of them. That was a job!  Between 5 of us with cameras maybe one photo turned out.  Those little stinkers couldn't be still for 2 seconds to look at the camera.  They were so excited to see what was coming up next. 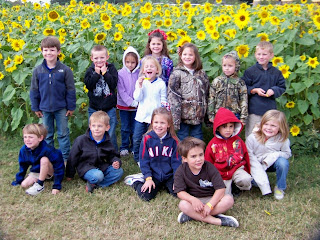 My baby girl also wanted a horse birthday cake for her birthday.  I went to Wal Mart to pick out one from the bakery but I was completely disappointed at what they had to choose from.  I ended up going by Mallory's request and purchased all of the things needed to make her cake.  I stressed out major for this one!  Do these things look like they will equate into a beautiful "horse" birthday cake? 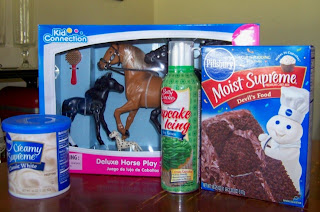