A Day of Family Fun

This past Monday, our kiddos were out of school for Columbus Day. I figured what better time to take them on a little family outing! So much of the time we are busy with school, life on the farm, and just life in general that we forget to just get away for plain ole' family time.  Dillon has been wanting to go to Battleship Memorial Park to see the USS Alabama for about a year now.  I had planned to go in the spring when the weather is usually pleasant, but we didn't really have a spring this year.  It went straight from winter to summer.  The weather was even a little warm for this time of year, but Monday was the day!


We were able to walk on the deck to check out some of the weapons that were used on this battleship.  It's very fascinating!  I couldn't imagine being at war while at sea.  My older brother is in the US Navy, and he loves what he does.  I am so thankful for those in the military that are willing to serve our country!


Not only was the trip fun for the kids, but it was very educational.  There was so much to see and learn, that I think we may have to make several more trips.  I don't think either of the kids would mind that at all.


In addition to touring the USS Alabama, we also toured a submarine, the USS Drum.  This photo below was taken inside.  Can you imagine this being where you had to prepare your meals and doing the dishes?  It was such a tight squeeze in there!  I find it so fascinating to see how different things were years ago, too.  I am a total geek when it comes to museums and such.  I love the smell of all of the old things, and I get so excited about seeing all of the historical artifacts.  I am so thankful that there are people out there willing to keep and preserve things for us to be able to enjoy. 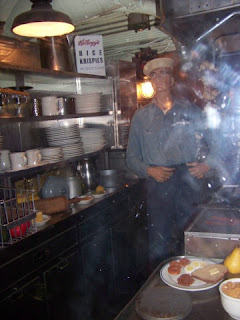 This is the "doorway" that you had to go through to get from one compartment to the other on the USS Drum.  Even the kids had to bend and twist to get through them.  For Shane and I being taller, it was a sight.  I would step one leg over and lean back and turn to get through.  I don't know how they do it!  Me being as clumsy as I am, I probably would have knocked myself out a few times by banging my head on the top part.  I can't even walk down the hallway in our house without running my shoulder into one of the walls at least once a day.  You'd think I had a put a little something extra in my coffee ;) 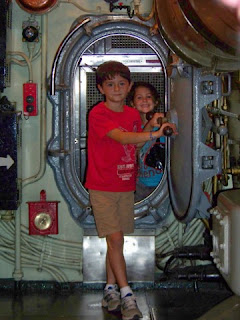 Along with the battleship and submarine, they also had many different  airplanes, jets, helicopters, and even some tanks. This was the favorite of Dillon and Mallory.  I'm guessing it's the cartoon character that made it such a hit. 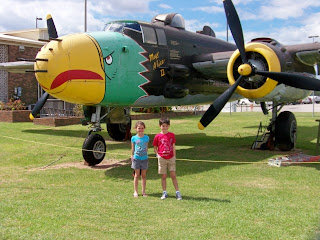 I hope all of you have a great weekend.  It is finally going to cool down a little here in the South.  We are hoping to have some mild 70's this weekend with very little humidity.  I am so ready for that kind of weather!