Boy oh boy! Have we had an exciting month! I've been behind on the news as usual, but I must say I'm spending more time enjoying everything that's going on more than thinking of my next post.....I guess it's been a little vacation :)

Our oldest Dillon is now the big "9". We had a trip to our state Farm Bureau Annual Meeting planned around his birthday, so we invited a few friends over at the last minute and had pizza along with an ice cream cake. Shane and Paw Paw got a fire going so we gathered around a bonfire and enjoyed each other's company. It was really nice!

Dillon received many nice birthday gifts, but I must say there has been one that has brought much entertainment to us.  It is the "Dart-Tag" gun set by Nerf.   The darts have a velcro tip that will stick to the opponent's "uniform" .  There's no denying if you've been hit.  Those things really stick.  Of course you get some pretty "cool" goggles to keep your eyes protected from all of the flying darts.  You will see in the photos below, how much fun Dillon and Shane have had with these.  It is very entertaining for me.  I stay out of the firing range and just laugh at them.  My poor treadmill has finally got some use lately. ;) 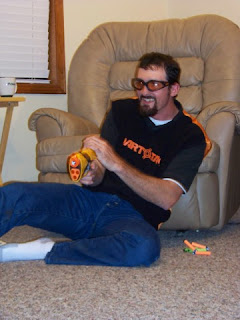 Some serious father and son bonding going on when this game is played.

For our 10th anniversary, Shane planned a surprise weekend getaway for the two of us.  He knew that I had always wanted to go see Graceland, so we made the trip to Memphis.  I had no idea we were going.   It truly was the best surprise ever!!  I absolutely loved being able to see all of the Elvis artifacts.  I grew up watching old Elvis movies and videos with my Aunt Lynne.  She was so in love with Elvis, and I guess that rubbed off on me as a kid.  Such good memories!

Of course, they had a photo opportunity for you to have your photo taken in front of a green screen that would show up the background of Graceland in the photo.  I must say that it was rather expensive, but I didn't pack my camera, so I wanted to have some sort of photo from the trip.  It was so cold that morning and the picture was taken outside: hence our large jackets.  If you are an Elvis fan, I would recommend making the trip.  It was wonderful!
Posted by Ashley at Friday, December 23, 2011