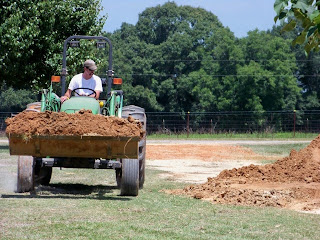 Shane called the county supervisor the other day to see if he could bring out a load of dirt....We ended up getting 3 loads! Shane has been filling up holes and trying to put it in areas that have washed away. We usually put hay on top of the dirt in those washout areas to keep it from washing the new stuff away. 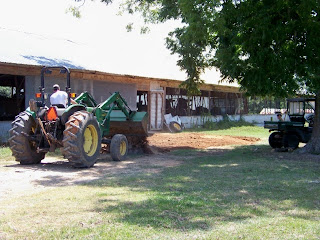 We also have a dirt road beside our barn (old chicken house) that has many low spots that holds water when it rains. Shane took some and piled it up on the road and we tried to level it out some. Look at the two hard workers. Dillon was working circles around me, then the camera came out and Mallory had to get in to have her photo taken! 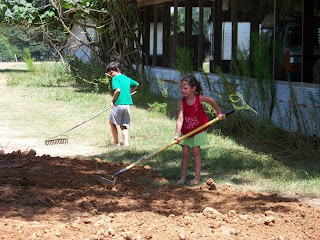 Mr. and Mrs. Shows brought back our buck Y 27 (we call him Elvis due to his fancy hairdo) that they leased for their herd. I will be getting updates on him on our website. We did do FAMACHA checks yesterday on all of our bucks and they all did real well. A lot of 1 and 2's!!! We do have some bucklings though that aren't handling things well where others are doing well. They are starting to show us which ones might make the final cut at 1 year of age.
Posted by Ashley at Friday, July 16, 2010