Can You Guess What Time It Is at DSK?

We had planned a particular event to occur in the first weekend of October. While it seemed the best date to us, some (mainly one in particular) have continually disagreed with when it should take place. Sooner rather than later appeared to be his choice.
I had to "rig" a gate to keep it shut, after a rebellious something  had to get out one day while my dear husband was at work. 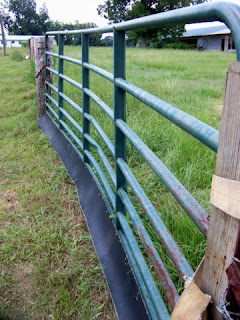 Holes had to be repaired numerous times in the old rusty fence.  It was realized on 2 occasions that if a hole was made in the fence with horns, it created a doorway to step out of the pasture.  Again the same something ( or should I say someone ) had to be rebellious!  I tell you there is no patience around here!


We've had to tell folks that it usually doesn't smell this way around here all of the time. I'm not sure if they believe us or not.  It seems like all people around here think goats always stink.  When in reality they don't; all  of the time,  that is.

Now that the aforementioned event has taken place,  a couple of fellas have been exhibiting  this very attractive facial expression along with having their coats take on a new color. 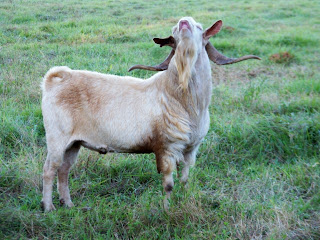 Have you been able to guess what time it is around here at Deep South Kikos with all of the clues mentioned above ?

Well if you haven't, I'll fill you in.  We have separated the does into two groups and put Rooster with one group and Pistol Pete with another, therefore it is breeding time for the goats!  We are expecting to see kids on the ground in March, when we will have clover for the does to graze. 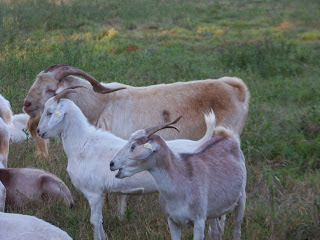 Here is  Rooster with 2  Pistol Pete daughters.  As for Pistol Pete, I haven't been able to get a photo of him since he was turned in with the ladies that isn't blurry.  He's quite the mover!

By the way, it was Pistol Pete that went crazy around here to try to get this breeding thing happening sooner than later.  He caused the gate issues and the holes in the fence.  I'm just glad that we're not having to hold them back anymore.  Pistol Pete was fit to be tied Saturday.  As a matter of fact, he did get tied Saturday........ hog tied.  He ended up breaking out first thing Saturday morning and got in the pasture with our whole doe herd, before we had separated them into breeding groups.  I managed to wrestle with him and get him hog tied until Shane got home.  Yeah, that was an event for sure.  Why does it seem like everything  crazy has to happen while my husband is away from the farm and I'm here by myself ?  It never fails!
Posted by Ashley at Monday, October 03, 2011