This Is How We Roll

We've tried various ways to put out the hay for all of the animals; cows, goats, and horses. When we have all of them co-mingling in the same pasture, there is a problem with how they are able to eat together  harmoniously. We have a rack that Shane made for the goats, but it is a little small for the cows and horses to be able to eat the hay. With the hay ring, the goats have the ability to climb right on top of the hay and make a mess on the whole bale for the rest of them.


So here's the solution to the problem.  The hay is unrolled every other day in the pasture.  Only enough hay is put out to last for 2 days, in order for them not to waste any.   In the photo below, you will see all of the animals following the tractor across this particular field getting ready for some hay.  You should see and hear all of the commotion when they hear that John Deere fire up.  And boy can they move when they see it enter their pasture! 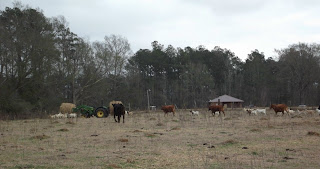 Below you will see Shane cutting the string from the bale in preparation to unroll it out in the pasture.  You can also see those impatient critters running in to sneak a few bites before he can even get it unrolled.

He puts the bale down in the correct position so that when he "bumps" it with the spear on the front of the tractor, it will unroll (you know, kind of like cinnamon roll, or a pecan wheel ). 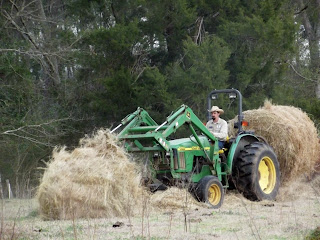 All of the animals scramble to get to a place where they can stand and munch on the hay.  There's plenty of space due to it being rolled all the way out, so they don't have to all pile up in one spot to try to fight to get some.  It works out rather nicely, I must say. 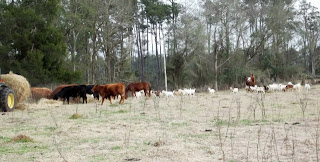