Our colt has turned 8 months old and it has become time for him to be weaned.

Shane had saddled up his mother recently, to take her for a short ride, and the colt went absolutely crazy when she was out of sight. I could only  imagine how he could hurt himself if we were to separate them completely. Shane ran  2 strands of hot wire and put Dixie (his mother)  one one side while the colt is on the other side. They are able to be close enough to each other for comfort, but he can't nurse. He also has the company of 2 of our geldings on his side of the fence.  He's been hanging out with the fellas not paying too much attention to his mom. 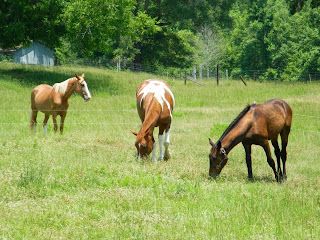 The palomino on the left is Dixie, his mother.  He is the bay at the right.  Sonny, the paint, is one of the geldings.  The weaning has went much better than I expected.  No running wildly and behaving psychotically.  So so so thankful for that!
Posted by Ashley at Thursday, May 24, 2012