Trip down the fire lane

Yesterday morning, I noticed some of our goats were not where they were supposed to be.  The whole back side of our property, which doesn't have electric fencing yet, is bordered by National Forrest.  I noticed a few does had gotten out, so I called them back in.  Well, it was only half of our does/kids.  I decided I'd better go find the other half.  I headed back to our house to get the remote for the electric fence and noticed a lot of movement in the forest behind our house.  I ran in and got my camera because I knew exactly what was happening.  The other half of does/kids had decided to make a trip down the fire lane that runs behind our house.
If you notice in the picture below, some of the pine trees have green vines growing on them.  This vine, along with other brush, seems to grow out of control in the woods.  Every year or so, the forestry workers conduct a control burn that will rid the forest of all of this overgrowth of brush.  They push a fire lane between our property and the forest to prevent the fire spreading to our property.  After the control burns, it doesn't take long before new growth starts. 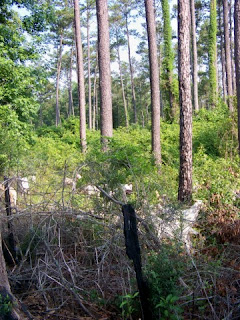 Our herd had managed to get out to take a stroll down the fire lane to forage on all the vines and such before (due to unreliable, dilapidated fencing). We ended up putting a strand of "temporary" electric fence to keep them from doing that. Long story short, we just recently removed that strand to put in another place and the goats have finally figured out it was no longer there.  So it is looking like we will be working on putting up permanent electric fence in that area.
The whole 80 acres was fenced years ago for cattle; which only required a few strands of barbed wire. If you know anything about goats, they will find a way to get past a 6 foot brick wall ( just kidding on that one). We have been fortunate to be able to put insulators on existing posts and running "hotwire" up about 12 inches from the ground.  One strand does the trick, so far.

While I was taking a few of the pictures the goats were too busy chowing down on the greenery to notice me at first.  Finally, when they saw me coming, they took off like a bunch of teenagers that had just been caught somewhere they shouldn't have been.  I've had to chase them down that fire lane back into the pasture before, so they knew the routine.  Most of them ran ahead, but there were a few brave ones trying to get in a few more nibbles before I could get close enough to move them on.   The craziest thing is that we have about 12-15 acres that they could be doing this in.  I guess the grass is always greener on the other side.
Posted by Ashley at Friday, June 10, 2011