It Was My Lucky Day!

This past Saturday, we managed to get a little break in all the rain that we've been receiving. I went out with Shane while he decided which goats were going to move to what pasture, and ended up being amazed at one of the smaller areas we have fenced off.  The clover has just burst on the scene in that area. The summer grasses had been eaten down in most of the areas, and that is where the clover is flourishing! 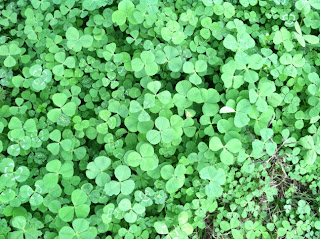 You can see how it is taking off in some areas, while holding back in others. 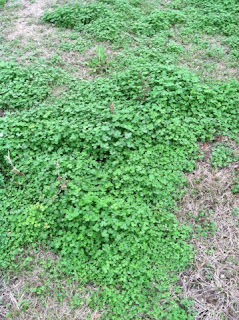 From time to time, I have managed to try to find a four leaf clover.  My patience usually gets the best of me and I give up.  I decided that I would just glance around to see if I could see one, and wouldn't  you know... I did!  All I could think of was that it was my lucky day!  It's not every day you find one of these.....As a matter of fact, I had yet to be so lucky.  I leaned down to pick this one and noticed another not far from it.  It wasn't until I got towards the house that I realized the other had 5 leaves, not four. 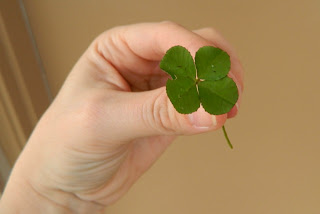 Does that mean that I will be even luckier?  I, of course, had to document my findings with a snapshot.  You know, just to prove that I am lucky! 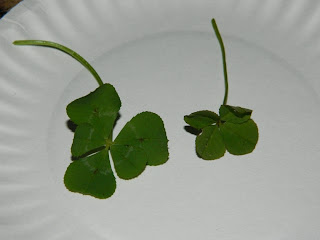 Heck, I'm so lucky that we were able to get the goats rounded up, after that, and do a quick FAMACHA check on them. The rain continued to hold off the whole time.   Now, don't you wish you were so lucky?

We managed to get the goats across the road without a hitch!  Those border collies are truly amazing help to us.  There was a time when it was just Shane and I running around out in the pastures to round up the goats.  That was a sight to behold!  The border collies make it look way better than we did! 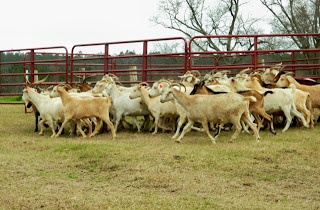 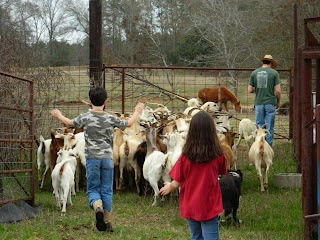 I also wanted to show you  a picture of my work desk for the day.  The clipboard is a spreadsheet with all of our goats ID # with their previous FAMACHA eye scores written on them.  All of the other stuff has been in the back of that mule since we worked on fencing 2 weeks ago.  The fence work has been halted due to all of the rain.  It's just too wet out there! 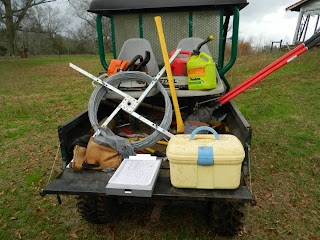 Hope ya'll have a great Tuesday!
Posted by Ashley at Tuesday, January 15, 2013