Hello everybody! I just had to share what we've been up to lately. I've been absent from my blogging due to the fact that I've "found" something else that has needed much more attention.

I had planned to go into a lot of detail to tell you the story of my new project....But plain and simple.....Someone that lives in same community as my grandmother had a horse that was being neglected.  It bothered my grandmother so much that she would call me and tell me about it.  She and my mother even went and purchased hay and feed for the horse.  They would transport water by 5 gallon buckets to give it a drink.  It was absolutely pitiful.  The owner didn't live by the pen it was kept in, and no one knew of a way to get in touch with her.

Finally, somehow, my mother got in touch with the woman that owned the horse.  She gave many excuses as to why the horse was in such bad shape.  She said that she had given it away to many folks, but no one would ever come and get it.  She told my mother that it would be a great favor to her for someone to come and get it.  Of course, they called Shane and I because we own horses.  You know, if you own one horse......or should I say 4.......what's one more?!  I couldn't stand the thought of it being neglected, so Shane hooked the trailer up and went to pick her up.   This is the condition that the poor girl was living in. 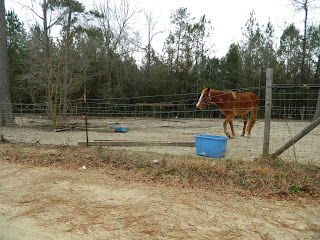 No forage.......and the days my grandma and mom checked on her, there was no water to be found and no evidence of feed or hay.  The owner did have one condition on us getting the horse......she told my mom that when someone came to pick up the horse, please don't let her donkeys out.  Yep, the horse and 2 donkeys were living in this pen.  My grandma said that the donkeys had just been moved into the pen, they had been roaming around the community eating grass in everyone's yards. 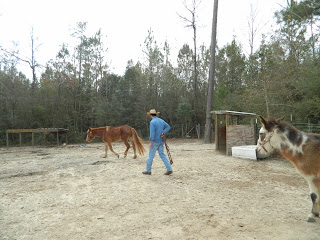 When she arrived, we dewormed her and slowly started introducing a little grain and some hay. 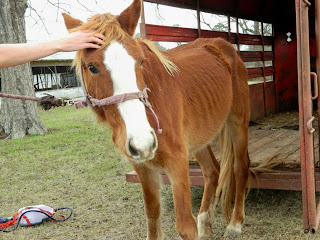 Her demeanor was very skittish.  Who knows what she had experienced in her life.  I truly have so much empathy for this girl.  I generally don't fool with the horses too much, but she has become special to me in just the few shorts weeks that we've had her.  I handle her every day and she will now lead with the rope.  She also lets me brush her without jumping each time the brush touches her.  She is slowly coming around and is becoming more trusting of me.  I'm glad that we were able to get her out of the situation she was in.


Judging by her teeth, she is around only 3 years of age.  Dillon said she looks like a gingerbread cookie, so he named her Ginger.  She may just be a diamond in the rough.  She just needs a little TLC, and she's been getting plenty of it from me.