We've got another Lasater Beefmaster bull in town! Mr. Nic Girgenti and his brother J.Girgenti (where were you Mr. Mike???) delivered "Buck" to us last week. We are trying out the Beefmaster breed with our cattle this year for the first time. You may remember earlier in the year I mentioned us having one shipped in from the Lasater Ranch in Colorado.  Well this guy is 9 years old and we may be able to get a few more breedings out of him.   We still have the other bull, but he's a young fella.  We will have quite a few cows that need to be covered, so all of our cows will calf within a specific time period.  I do believe Buck will be able to help out.  As you can see below, the ladies couldn't wait to come and check out the new man.

It wasn't long before all of the ladies made their way to him.  This is the last picture I could get before he was surrounded by them.  He and the young one have been working out their differences, and I do believe that today they had it pretty much worked out.

Also, Shane made a trip to Buckatunna (thank you to the Anderson's ) to get a horse for his baby girl.  She has been wanting her very own horse for some time now.  He found this little Paso Fino and brought him home.  The only problem is that he is still a stud.....and boy did he let us all know it when he arrived.  He might be a small little fella, but his personality was quite large when he caught a glimpse of our mare.  Shane intended to keep him separated from our other horses, but he managed to get through one fence into another pasture.  Shane said they would all just have to work it out in the field, because he wasn't going to be able to keep him separated.  We didn't have an area that would hold that fella back.  And wouldn't you know the one mare that we have was in heat!  Seriously.....Shane turned him in and he wasted no time with introductions.  I stood there trying my darndest to get Dillon to go to the house before I had to dive into that whole conversation about what they were doing. Horses are just SO obvious!  Yes, we live on a farm.  Yes, he is aware that the boys animals and the girl animals can make baby animals by being together.  But......we haven't went into that conversation like how I was going to have to do if he stayed out there a few seconds longer.  I'll be honest.......I just wasn't ready for it.

Let me change the subject please.....(I was starting to get that same overwhelming feeling of panic just thinking about it all over again ;)

We are preparing for Tropical Store Isaac that is in the Gulf of Mexico.  We live about 50 miles north of  the Gulf Coast.  After going through Hurricane Katrina almost seven years ago, we don't want to take any chances.  They are still unsure of where the system will make landfall, but we are in preparation for it.  Shane has had to work on the generator to get it connected to the house. 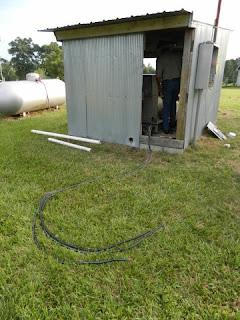 He had to connect the wire into this box that  contains the power selector switch.  That way if the power goes out here, he can flip the switch and fire up the generator.  It's a pretty big generator.  It should power the house fine for us.  Shane's grandparents had the generator here because they had 3 chicken houses to keep running should the power fail. 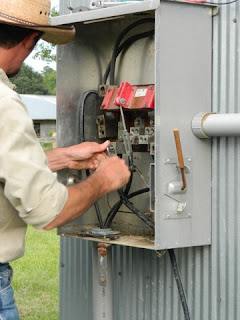 When it was all connected, he fired it up and gave it a test run.  It worked like a charm! 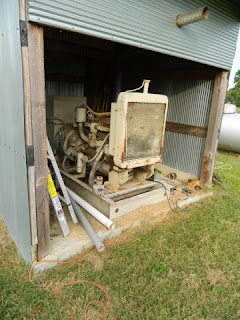 As for now, they are predicting it to make landfall the the west of us, which will put us on the east side of the storm.....the worst side. I will be keeping my eyes glued to the tv and facebook updates from our local weather station.  This is the latest model I have seen.  Hopefully I will be able to update with good news.