Pumps, Pruning, and Moving...oh my!

Boy, has a lot happened since my last post! I have finally made a point to stop what I'm doing and sit down in front of this computer just long enough to share a tidbit. As most of you know, we have been remodeling Shane's grandparents old house to move into. It has been 2 years of literal blood, sweat and tears. Shane and I decided to do all of the work ourselves; with no knowledge of how to do it under our belts. Nevertheless, we set out to do it so we could save money and strengthen our marriage. (Haha Heehee) Well, not really for the strengthening our marriage part but definitely for the money savings.....for any of you out there that have done this type of thing alongside your spouse, you know that if you've made it through to the end...you are some kind of strengthened!

Two weeks ago we were seeing light at the end of that long, dark tunnel. And of course, as usual, something had to go awry. Our pump on the water well failed while Shane was at work.  This is not only an issue for the housing situation, but this well supplies water for drinking pads in 3 of our pastures.  With the heat like it has been, those animals can really put back some water.  With Shane's guidance over the phone, I made several checks for him so he could determine what was the issue and would know what he would be facing when he arrived home from work.

When he got home, he got ready to lift off the top of the pump house to pull  the pump out of the well. Luckily, he did one more check and it ended up not needing to be pulled.  It was a "run capacitor" issue and the water tank had no pressure.  Now folks, I'm just repeating what I think I heard about the run capacitor......you will have to verify it with Shane on that one.   I'm no mechanical/electrical genius like my dear husband ;)  As for the tank pressure, I witnessed it with my own two eyes.  We had to take his air compressor and fill the tank.  That also included measuring many 5 gallon buckets of water to get the pressure and the shut on/off switch set up just right.  We managed to get it to where we would get 25 gallons of water before the pump would kick on; where before it was only 5 gallons.  Once again, this was something we had no knowledge of what we were doing, but it all worked out.  That whole story may have bored you to tears, but I tell you, I'm so proud of that accomplishment! 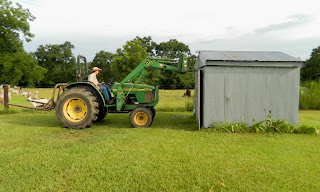 All while the work was going on at the pump house, we had a very attentive audience.  You know that feeling you get that someone is looking at you?  It is a common everyday thing here.....Everywhere we turn, there is some animal looking at us trying to figure out what in the world we are doing.

On another note, we have these huge trees growing up beside the old chicken house, which is now our barn.  They needed a little pruning, so of course, we had the perfect solution..... 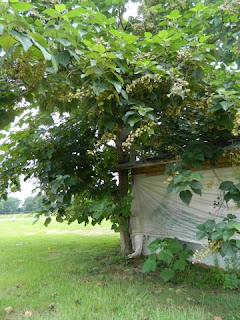 Just turn the goats out and let them nibble.  It was like a day at the candy shoppe for them.  I'm not sure what these trees are called, but the goats really do enjoy them. 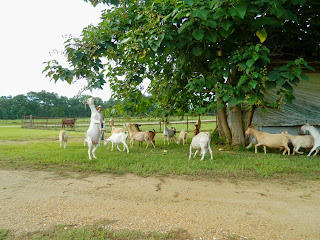 Lastly,  I wanted to mention that I had to have my gallbladder removed.  That is a lot of the reason for such a long break in my blogging.  It was done outpatient, but I must tell you that just because a procedure is done outpatient doesn't mean that the recovery from it will be minor.  Every person responds differently, but  I can honestly say that it kicked my behind!  For 7 days afterwards, I was not worth two cents. On top of that, we decided to go ahead and make the move into the house.  I have to say, that I thank the Lord for my mother in law!  She came this past Saturday and between her and Shane, they got all of the heavy things moved.  Let me tell you, that lady is one hard worker.......   So we are officially in the "new" house.  There are a few things left to be done, but hopefully we can get to some sort of normalcy before the kids start school Monday.

I'm sorry that I have no pictures to share of all of that, but the last thing I thought about was the camera.  I hope to get back into the swing of things and keep you all updated on our happenings in a more timely fashion.


Hope yall have a great week!