He Did It Again

For all of you out there that don't like creepy crawly things......I suggest you don't look any further. For me, I still get the heebie jeebies, even though I know the outcome of this story. Saturday, while my dear husband was out in the fields with his bush hog, he happened to see this creature slither out of an area he had just clipped. He said that it managed to get out of his sight so he figured he would see it later on. Naturally, he saw it later....heading straight for the pasture that had our doe herd, cattle, and 2 of our anatolian shepherds (Livestock Guardian Dogs).  Some of you may be aware of what happened to one of our LGDs a little over 3 years ago involving a rattlesnake. To see that story, click here.  Our vet is still telling the story to others about that huge rattlesnake that got a hold of our LGD.

Shane said that he found a stick and went to get to it before it made it's way into the pasture with all of the animals.  We certainly don't want to relive what happened with Chopper. 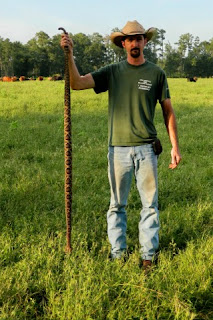 Of course, after my initial shock (screaming and jumping around) of seeing the rattlesnake, I decided that I needed to get my camera.  You know, so I could share this story with you all.  I know that most of you are surely enjoying it.  Hardee har har...


The snake had 14 rattles and 1 button.  I'm not really sure what that indicates, but I know most people around these parts always ask,  "How many rattles did it have?"  So for you curious minds, there you have it.  Also I didn't want to run to get the tape measure, but to give you an idea of how long it was....My hubby is around 6'1".