Moving Cows With A "Little" Help

Get ready for lots and lots of pictures. I had many more to share, but I tried to cut back so you wouldn't get picture overload ;) We have divided a 15 acre pasture into three paddocks by using a "portable" electric fence. It is a strand of wire on a reel that can be moved in just a matter of minutes and put up in another location. The reel is secured on a metal t-post but we also use plastic t-posts that you just step into the ground for the wire. Pretty simple, even I can do it.

When it comes time to move the cows from one area to the next it all starts like this.  Shane stands at the point of entry and makes his call.  They know his voice and call....mine is different, but they seem to work similar.  Just make a good hoot and holler and they will come. 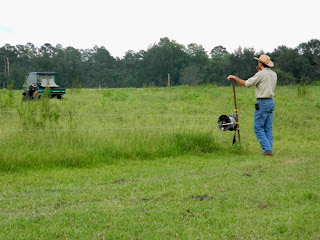 The area to the right of this post is where the cows were grazing before being moved to the side on the left.  You can see the difference in the forage. 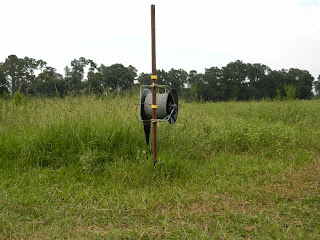 The ladies and gentlemen make their way down the side of that paddock headed for Shane's direction. 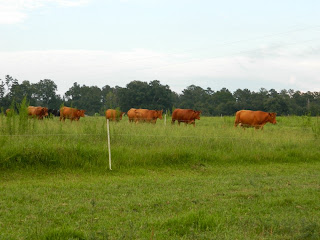 Shane detaches the electric wire and makes a wide opening for them to enter into the new area.  You have to make a noticeable opening to the new spot because the word got around the herd that they do not want to come into contact with that "electrically charged string".  They are very cautious around it. 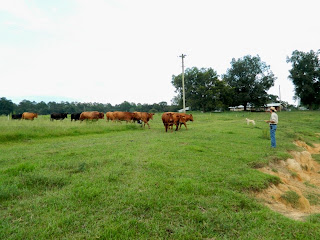 Once the first one makes the step onto the new grazing area, they all follow.  Some do get a little excited and push and shove.  Even a few start bucking like a bronco from sheer excitement of new ground! 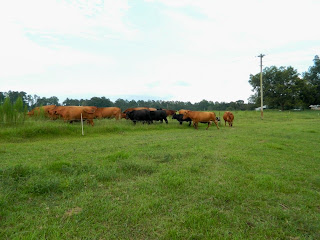 If you look in the background of this picture below, you will see the windshield of the Kawasakii mule.  Mal is bringing up the rear of the herd.  The calves always get caught up in the excitement and can't figure out which way to go.  Mal really enjoyed getting to do this part.  I think it was her first time to do it by herself! 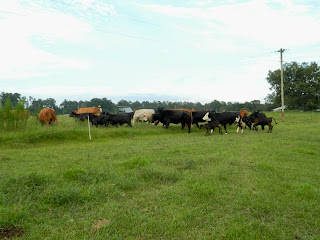 Can you tell by this photo that she was so loving being able to help out?  I mean when she pulled up there by me, she couldn't contain that smile.  Shane joked around and told her to give me her serious working face.... 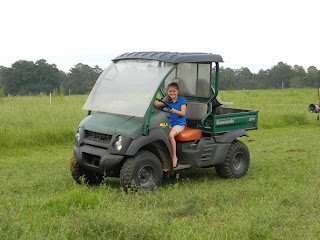 Trying as best she could to get that serious look.   You see, her big brother always gets to do these sorts of things.  Well he has been sick all week and Mal jumped at the opportunity to help her daddy out.  She didn't even take the time to change from her school uniform into her "workin clothes".  That's alright though, I'll do a little extra scrubbing.  This day was priceless!

I proceeded to go reel up the fence so it could be moved and wouldn't you know that girl wanted to jump in there and do that too!  She was such a great helper, let me tell you!  Her big brother better watch out! 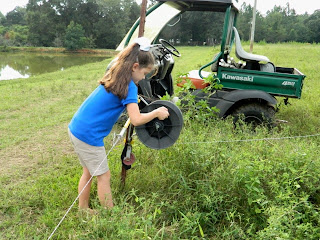 After the fence was moved, Shane got out in the pasture with his bush hog and knocked the "tops of the weeds down", as he calls it.   Hopefully we will get more rain and the grass will come on up even better. 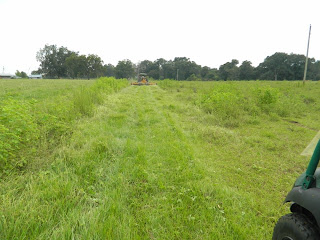 I forgot to mention that we have the one strand of electric wire to keep the cows out of those areas of pasture, but the goats are able to come and go underneath it and graze the whole pasture.  They just can't keep up with all of the weeds we've got.  Hopefully we will get our numbers back up with the goats.  We haven't put the bucks in with the does yet.....trying to hold off so we don't have a freezing cold kidding. We are shooting for later in the spring.
Posted by Ashley at Thursday, August 23, 2012